SJ Howitt writes: There is an unmarked plot with a simple stone marked "For the foreign persons who died at Libury Hall and are buried in this place" at St Edmund and The English Martyrs RC Church Old Hall Green.


There are some named records but not all and re the 1st World War internments according to the NRA at Kew these would have been lost during the bombing of Red Cross Geneva 1940.
Posted by Chris Reynolds at 10:05 PM No comments:

Pictures of the last day at St Albans Museum

The Mayor of St Albans, Councillor Salih Gaygusuz, opens the door of the museum for the last time, on Sunday, September 21st, after having been introduced by the Portfolio Holder, Councillor Annie Brewster. For more pictures on the final day, and also of some recent exhibitions:
CLICK HERE
The Foundation Stone was laid on 20th July 1898, on land given by Earl Spencer, and it was erected using "red bricks of local make" . It was opened in November 1899 and was originally referred to as the Hertfordshire County Museum.

One hundred and 117 years later I felt it was important to represent the family at this historic event. The Museum building was made of bricks made in Jacob Reynolds' brick-works on nearby Bernards Heath so I am sure myGreat Grandfather Jacob must have been at the opening. Also at the opening was Arthur Ernest Gibbs, the first curator of the Museum. Arthur's Grandfather, Richard Gibbs of St Albans, was the brother of my Great Great Grandfather, John Gibbs of Aylesbury.
Posted by Chris Reynolds at 9:30 PM No comments:

During September the British Newspaper Archive added copies of the Bucks Gazette between 1829 and 1849 and a quick examination shows that news from West Hertfordshire. This includes the period before the first Bucks Herald newspapers, which start in 1836.

The issue of 7th March 1829 reported the theft of money and goods from the Berkhamsted Post Office and the procession taking the Earl of Bridgewater's coffin through Hemel Hempstead to be interred at Gaddesden. During the summer there are reports of cricket matches including one between Tring and Wendover which was covered at length by the Bucks Gazette in their issues of 29th August, 5th September and 12th September, 1829.

If you can find any particularly interesting Hertfordshire stories in the period 1829-1935 let me know via the comment box below.

Posted by Chris Reynolds at 9:23 PM No comments:

The Aylesbury Arm of the Grand Union Canal runs between Tring and the villages of Long Marston and Tring and over the years I have taken many photographs of the historic locks, bridges and houses along its route. Information. At least one picture of each historic feature has been recorded on Geograph and a full list can be found HERE. Howver many of the pictures I have taken are still not online.

The above bridge is vulnerable to damage from passing traffic and is currently under repair. As a result I have posted pictures of the damage, such as the one shown below, and all pictures of the bridge on Geograph (some taken by other people) can be seen HERE.

Posted by Chris Reynolds at 2:15 PM No comments:

I have updated the relevant page on the web site to include a number of 100+ year old pictures of the canal, together with pictures of the historic locks and bridges taken in the 21st century.

I have taken a lot of pictures of the canal in recent years, and will be making more available, with historic images where available, over the coming months.
Posted by Chris Reynolds at 8:18 PM No comments: 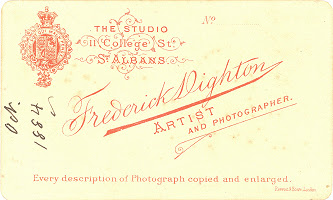 This carte de visite, which is dated 1884 as been added to Frederick's Time Line - making it easier to date his work.
Posted by Chris Reynolds at 7:54 PM No comments: 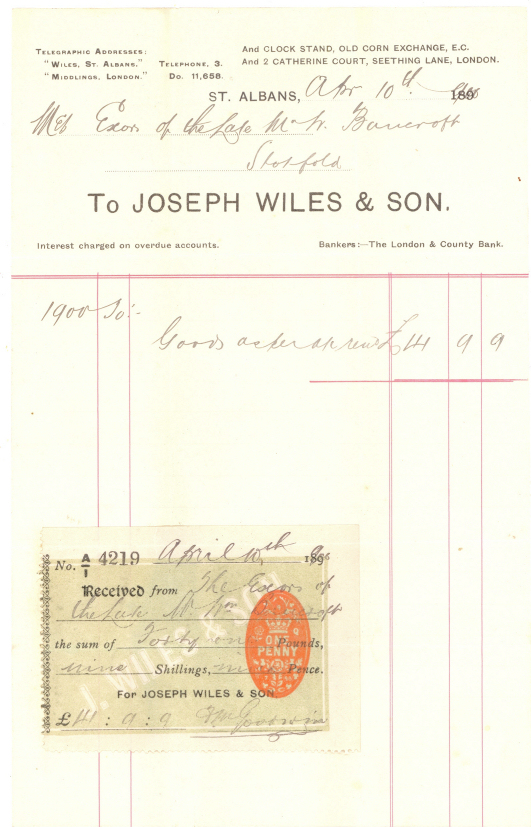 I recently saw this document on sale on ebay, and was interested to discover why a St Albans corn merchant should have a London address. So I did a bit of research and find that Joseph Wiles made a useful contribution to life in Victorian St Albans and was the brother of E. S. Wiles, who had a suet making factory on Bernards Heath..

Aided by Heritage Lottery money Tring Camera Club are creating an archive of photographs showing Tring as it is in 2015. This is part of the Tring 700 celebrations of the market which got its first charter in 1315. Associated with the archive is a competition which is to be voted on by the public.

There are 9 categories in the competition but if you start with one you can select the others at the bottom of the page. Tring Camera Club entries are under the following headings: Tring Street Scenes, Community & Events in Tring, Tring Landscape, CACC Wildlife in Tring. You will find non-Camera Club entries under the headings: Tring Daily Life, A Tring 700 Event, Historic Tring, Modern Tring and Wildlife in Tring. The selected pictures will be on display in the Natural History Museum at Tring from 9th October to 21st November.

Posted by Chris Reynolds at 6:44 AM No comments: