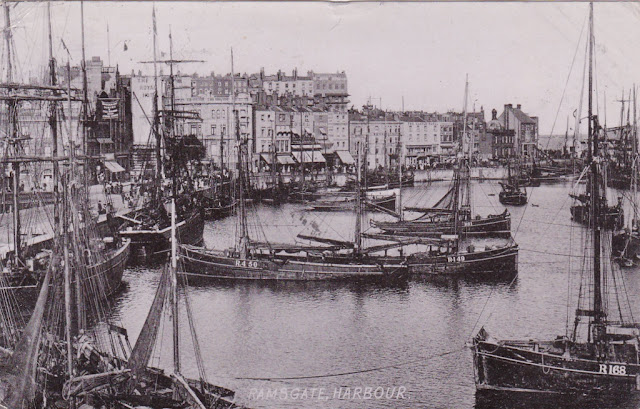 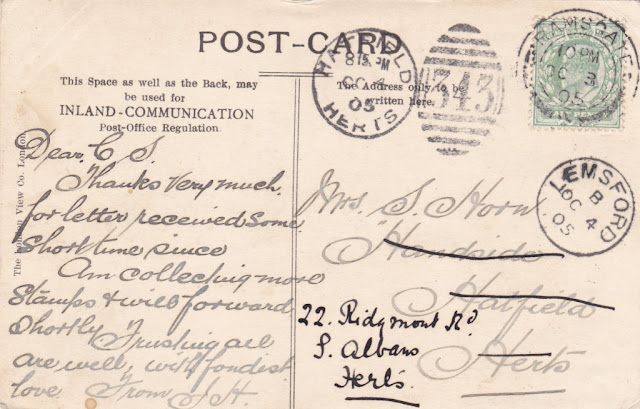 Clearly more research is needed but the first thing to do is to find out where the cards came, and looking things up online, or in old directories, etc., can wait.

More urgently I needed to check out the source. I brought the cards on ebay from eastangwide, who appears to be selling off the contents of an old album of circa 1905 cards addressed to Mrs Horn of Handside, as view cards, with no reference to the family history contained in the collection. At least 20 cards addressed to Mrs Horn from around 1905 are currently being sold, together with some unposted Hertfordshire view cards of places within a few miles of Handside Farm which probably also came from the album. At least some of the cards were sent by relatives and the "Jack" referred to above also signed himself "J C H", Another card to "Dear Grannie" was sent by Percy Horace Webb who is on my family tree because in 1936 he sent a wreath to my great grandmother's funeral, while an undated cutting in a  Reynolds family scrap book says he died falling down the stairs at the St Albans Constitutional Club.

I am in the process of purchasing a few of the cards (mainly the local views I haven't already got) and details will appear on my website - with a mention in this newsletter. If I had unlimited time, energy  and money I would like to expand my earlier researches into "Who is related to Who" among the larger farmers in the area to include more of the Cox and Horn family. In practice I will not be taking it much further because there are other greater priorities. The point is that the postcards Sarah Horn so carefully saved over 100 years ago will be scattered to the winds, and the family stories buried in the complete collection will be lost for ever.

It is important to realize that what has happened to Sarah Horn's postcards is not unusual. It is what is happening all the time as personal effects are sold off as part of a house clearance following a death. In fact this is how most old post cards get onto the market. I am posting this so that anyone interested in the Horn family that sees my blog can acquire any unsold cards. In addition I want to warn everyone that if there are treasured family heirlooms to make sure that either they are kept in the family, or at least a digital record (multiple copies) is kept for the benefit of future generations of family historians.

Of course family photograph albums, especially when people are identified, need to be safeguarded as well, and there may be individual letters or other documents which are worth keeping for posterity. For some examples see my page on Ephemera.
Posted by Chris Reynolds at 2:33 PM