A Detour into Buckinghamshire 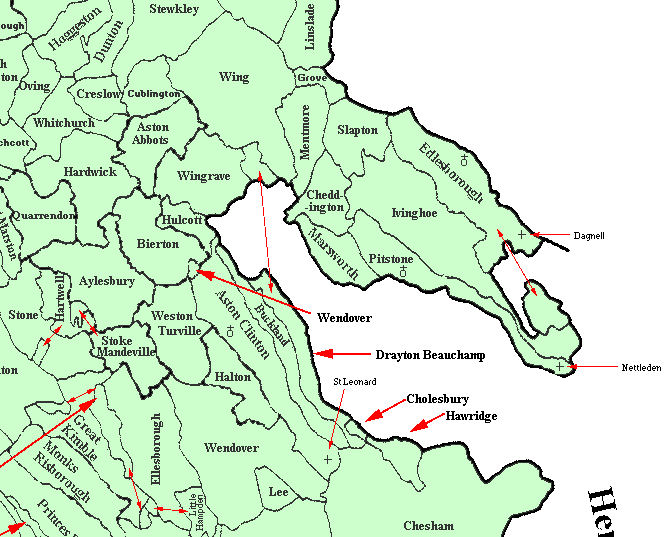 One of the frustrations of this web site has been that I live in Tring - which is the western part of Hertfordshire which is surrounded on three sides by Buckinghamshire. I enjoy walking the countryside, taking photographs of features of historical interest and well as the wild life and farming activities. With the Vale of Aylesbury to my north, and the Chiltern Hills to the east and west there is much to keep me occupied - but most of it is in Buckinghamshire.

The point is that the county boundaries of Hertfordshire are in most places highly arbitrary - and mainly derive from the boundaries of Anglo-Saxon estates over 1000 years ago. While administrative history may limit itself to such boundaries they are for most purposes arbitrary lines which in some place are not even marked by as much as a hedgerow. Treating the county boundary as a rigid "no-cross" line causes significant difficulties if you are discussing local history.

One example relates to Tring as a market Town - when many of the people who used the market to buy and sell would have crossed the county boundary to do so. William Brown was an auctioneer in Tring in the 19th century and, when I have time, I am presenting details of his Customer Account Book which again deals with customers on either side of the boundary.

Another example relates to the Canal, its branches, and its reservoirs, where any account of its history automatically involves both Herts and Bucks - particularly the Bucks village of Marsworth.

To make it easier to cover issues which cross the county boundary it has been decided to introduce pages for Buckinghamshire parishes which are associated with the canal, plus some adjacent parishes in the Vale of Aylesbury. Each page will consisted of one or two old post cards images and links to my modern photographs, which will be held as high resolution images on Geograph. There will also be links to cross-boarder topics on the Hertfordshire web site and external links to other relevant web sites. There will be no attempt to duplicate the excellent information on Buckinghamshire GENUKI.

To get this rolling the Buckinghamshire page has been updated, together with demonstration pages for Marsworth (which includes a significant section of the Grand Union Canal) and Aston Clinton (which includes short sections of the Aylesbury and Wendover Arms of the Canal, and the site of a former Rothschilds House.) This will be considered a low priority project with perhaps one or two place pages added each month.

Posted by Chris Reynolds at 5:08 AM