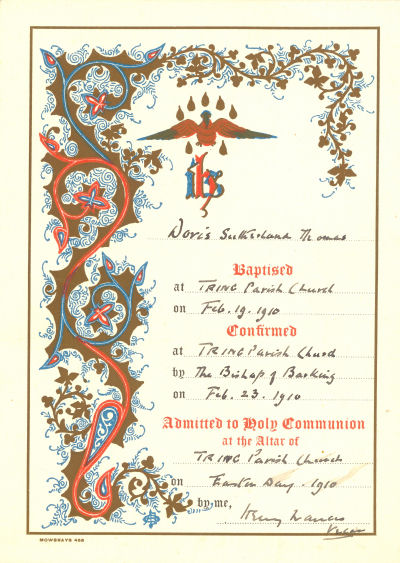 It is important to remember that not all Church of England baptisms were infant baptisms as this interesting document shows. Doris Sutherland Thomas was born in 1891 but was not baptised until four days before she was confirmed by the Bishop of Barking in 1910. She lived at the Mill House, Brook Street, Tring.

On the main web site (Walter Thomas, Mill House, Tring)  I have posted some information about the house and her family.

Walter Thomas was born in the Scilly Islands, the son of a shipwright, and he became a marine engineer in Kent. Meanwhile Lord Rothschild was making changes in Tring and closed the Silk Mill - converting it to become his estate management department. He employed Walter Thomas as an engineer, who was responsible for supply electricity to Tring Park and became estate engineer.
Posted by Chris Reynolds at 1:10 PM