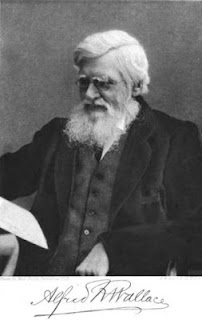 A. R. Wallace (1823-1913) is best known because his theory of evolution by natural selection was drafted before Charles Darwin's had finished writing On the Origin of Species. Because of my interest in evolution (see posts on my other blog, Trapped by the Box) I was interested to see that Wallace's works are now available online.

However his mother came from an established Hertford family (her grandfather William Greenell was twice mayor of Hertford), and Alfred was educated at Hertford Grammar School.

While Alfred's book My Life is well known because of his scientific work it is also a very useful source about Hertford in the 1830s with vivid descriptions of the town and what is was like to be a pupil in a small school such as  Hertford Grammar School. For this reason I have written a review on this aspect of the book.
Posted by Chris Reynolds at 9:28 AM