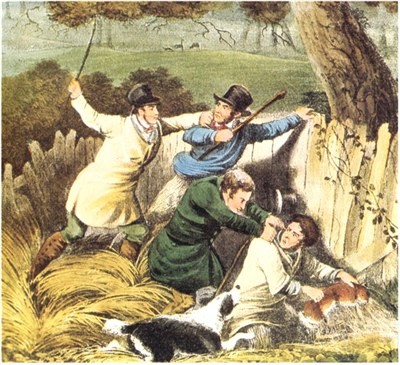 When I wrote in detail about Poaching and Petty Thieving in St Albans I decided to give extensive details of the Stratton family, whose name kept on turning up in the records. Of course the Stratton family were not the only criminals to be caught, and poaching and related crimes were common throughout Hertfordshire.

Ian has drawn my attention to John Brewster, who spent census night 1901 in the cells of the Police Station, Victoria Street, St Albans, where his occupation was unflatteringly described as "Habitual Thief." I had a quick check through my press cuttings from the Herts Advertiser, and found four references to the Brewster family in the 1870s. In 1871 a copper pump was stolen from the Bernards Heath brickfield and John Brewster gave evidence [Charge of Stealing a Copper Pump]. In 1872 Samuel Hope, George Brewster  and Joseph Balls  were charged with trespassing in search of rabbits on land in the occupation of Earl Spencer, of Sandridge [A Raid on the Rabbits] and John's older brother spent 10 days in prison. In 1874 John Brewster was given 14 days for trespassing on Bernards Heath in search of game [Game Trespass]. I also have a brief reference to the fact that in 1875  John Brewster and John Edwards were convicted of searching for conies on the land of S. J. Rumball, of Townsend Farm.


Have any of your ancestors ever been before the courts? Or were they a victim? If so you may be able to find out some additional personal facts about them in the press or court records.

Posted by Chris Reynolds at 7:58 AM