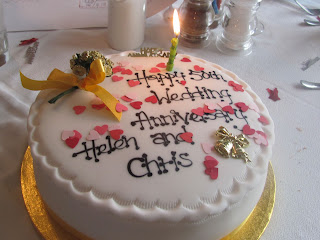 I have just had six days away when I was separated from the computer. As a result this site has been somewhat neglected. But do I care? The answer is "Not at all."

My full-time live-in personal social secretary reminded me that we need a holiday - and for some reason she suggested that the 26th of September was a good day for a family get together.
As both of us spent our early years in Devon she busied herself on the web laying plans for a short holiday in the South West of England and a  week ago we set out to visit out old haunts.

We needed a base and the Ilsington Country House Hotel proved ideal for the purpose. It was close to Haytor, a rocky hilltop in the Dartmoor National Park from which we could look over the countryside around Newton Abbot, where I had been brought up, and Teignmouth and Shaldon (where Helen lived) in the distance. Food and service at the hotel were excellent - and I greatly enjoyed using the swimming pool.
We both had a great time touring round the district, revisiting old haunts with other members of the immediate family, and the final celebration was an excellent meal at the Owl and the Pussy Cat, in Teign Street, Teignmouth, where we finished by blowing out the candle of a tasty cake.
During our tour round we drove up a narrow lane at Buckfastleigh to look at the buildings at the William Pengelly Cave Studies Trust and I made a note that I must make a proper visit next year as the Trust will be celebrating its 50th Anniversary - and I was a member of the original committee, as secretary of the Devon Speleological Society.

[Normal postings to this blog will resume early in October]
Posted by Chris Reynolds at 7:57 AM