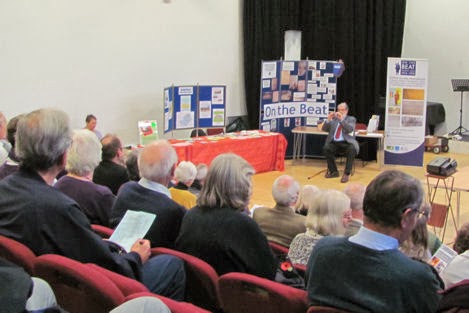 I have just returned from the Herts Association for Local History Symposium which was held today at Abbots Hill School, Nash Mills, Hemel Hempstead. As always there were interesting talks, the opportunity to speak to people you haven't seen since the last symposium, and some interesting books on display - which will be covered later.

Before hearing Robin Harcourt Williams' talk on the building of Hatfield House - as I had not been aware of the extent of the surviving documentation relating to the manufacture of brick in the 17th to 19th centuries. Alan Thomson's talk on the unusual brick made by Caleb Hitch of Ware provided a very different insight into the brick industry in the county in the 19th century. From Peter Greener I learnt about clay bats - very large unbaked clay bricks used for walls and working buildings - while some houses were really little more the mud hutswhose walls needed to be protected from the rain. (Compare with the use of cobb in other parts of England.)

Other talks, such as Professor Martin Biddle's talk on floor tiles from St Albans Abbey, and Helen Gibson's on timber framed building, were enjoyable but of less relevance to this web site because they related to the medieval buildings.  As my parents lived in three different thatched cottages Colin Webb's talk on thatch was instructional and I was amused that many of his pictures were of "Pig's Nose", a cottage illustrated on my Buntingford page.
Posted by Chris Reynolds at 9:26 PM