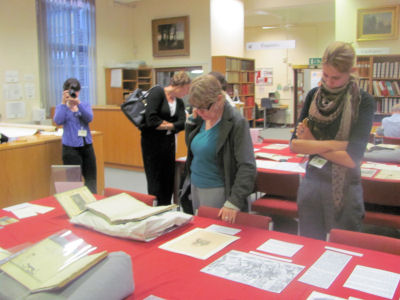 Yesterday I attended the "Herts and Minds" evening at HALS and was impressed by the range of original documents relating to mental heath in the Hertfordshire county archives. I was interested to see the case notes of early Hill End Asylum patients and the deaths register. I noted the burial details of Emily Evans, whose tombstone I had recorded on the page about old asylum cemetery - and it appears that the first few patients who died in the asylum had grave stones - but later patients had more economic burials. However, despite the wealth of material on display the message I left with the impression that for many of the mentally ill of the past very few records remain.

In addition to the documents on display there was a very informative series of display panels on the history of mental illness in Hertfordshire over the centuries. They will remain at HALS until the end of next week, but it is planned to make them available on the Out of Sight, Out of Mind web site. (this site has greatly improved since I last visited it.) There was also a very informative booklet .about the Out of Sight, Out of Mind project - and the map showing the five St Albans Asylums is taken from this booklet. The booklet is interesting for its honesty in that it looks at the various events in the history of the project and for each identifies "What worked", "What could have gone better" and "Special moment". 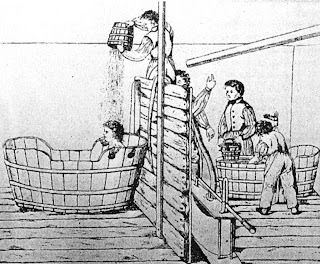 There were also two stands. The Hitchin Historical Society is adding to their list of publications by bringing out a new book Cold Baths don't Work - A History of Mental Health Care in the Hitchin Area, by Mike Clarke. It is being launched at 10.30 on 29th October at Centenary House, Grammar School Walk, Hitchin, SG5 1JN.

The mental health charity Viewpoint was also there and I had a long talk as I was in regular contact with the charity about five years ago - when I ran the blog Hertfordshire Mental Health Crisis. (Since running this I have retired from all the committees I was on - so I am not involved in the current more serious cut backs.)
Posted by Chris Reynolds at 10:45 AM