A celebration dinner, the very rich, carts and the railway 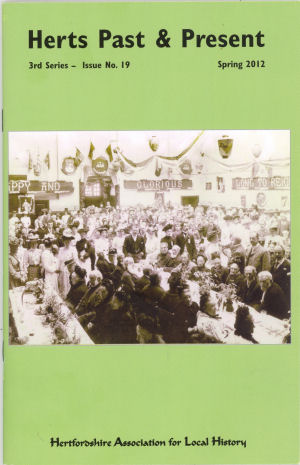 The Spring 2012  issue of Herts Past & Present contains four interesting articles. The abstracts and main heading are given here - and the purpose of this review (below the fold) is to explain how reading the articles can help give you ideas for doing local and family history research.
Hertford's Coronation Dinner, 1902: Special events like this, where a large number of elderly residents were treated to a great dinner, were an opportunity for a Town and its well-to-do inhabitants to enhance their social standing. The coronation celebrations would have involved a wide range of people in different roles, and at this date there may well have been photographs. For the bigger towns, at least, the planning for, and execution of, such events will be well covered in the local press. In addition there might be surviving ephemera - such as programmes.  Even if such records do not mention your ancestor they help to paste a picture of what was going on in the place where they lived.

The Italian Earl and the Farmer: The poor worked hard in the fields so that the tenant farmer, such as John Carrington, could live in modest comfort in his farmhouse. And the tenant farmer paid rent to the well-to-do absentee landlord - George Clavering Cowper - who lived a life of luxury in Italy. The article is a reminder of the words of the hymn All things bright and beautiful which are omitted from politically correct modern hymn books:

The rich man in his castleThe poor man at his gateHe made them high and lowlyAnd ordered their estate.

Such articles serve to remind us of the gulf between the rich and the poor - and the importance of keeping financial and social status issues in mind when researching your ancestors.

Cartage in Jacobean Hertfordshire: I learnt something new on reading this article. When the King traveled around the country he had the right to "hire" your carts to carry his goods at a price that he chose. This commandeering of carts, etc., did not go done well with the inhabitants of Hertfordshire, as the roads from London to a significant part of the country went through Hertfordshire. In fact cartage could have been one of the reasons Hertfordshire supported the Parliamentarians in the later Civil War.

While your ancestor may no have been affected by cartage, the article is a reminder of why it helps to know what factors (social, weather, law changes, etc.) would have affected him at the time you are studying.

Tring and the Railway: Perhaps the opening words of the abstract "In this topical look at railway and landscape ..." led me to expect more that I found. It discusses the origin of the railway in the first half of nineteenth century from contemporary railway records and if it restricted itself to this period I would be much happier - although I might have expected a mention of the branch line to Aylesbury which passes through through the parish - and was the first ever purpose-built branch line. However it then jumps to the mid 20th century - incorrectly stating the Silk Mill closed sometime after 1956 when it actually closed in 1898, when the building (which still stands) was converted to workshops for the Rothschild estate. Even worse it outrageously suggests that a nearly 20% decrease the population of Tring between 1881 and 1921 was "possibly due to the number of men killed in World War I." (The drop actually happened between 1891 and 1901 due to the boundaries being redrawn.)  The article refers to electrification in 1966 and stops there, giving the impression it was written over 40 years ago. There is, for example, no reference to 30 or more books and booklets that have been published relevant to the history of Tring in the last 40 years, or the wealth of information available via modern online census indexes.

There is a lesson here for the average family historian. Family history is far more than extracting sentences which happen to refer to your ancestors. You must carefully consider the source and how reliable it is - and be prepared for even quite respectable looking sources to contain errors.

Posted by Chris Reynolds at 6:30 AM