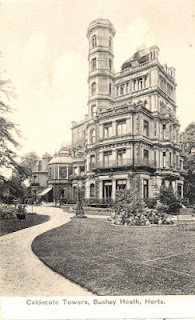 As a student, over 50 years ago, I went to see Flanders and Swan in "At a Drop of a Hat" and looking at Caldecote Towers very much reminds me of their song "Design for Living". In this song they describe how "We're terribly House and Garden At Number Seven B" by being ever so contemporary:

We planned an uninhibited interior decor, Curtains made of straw, We've wall-papered the floor! We don't know if we like it, but at least we can be sure There's no place like home sweet home.

Ending with the killer verse


Oh, we're terribly House and Garden As I think we said before, But though Seven B is madly gay -It wouldn't do for every day -We actually live in Seven A, In the house next door!

Captain William John Marjoribanks Loftus-Otway built  Caldecote Towers  in the 1870s but then seems to have abandoned it for his house in Grosvenor Square. Perhaps he found his jumbled pile unsuitable for everyday living!

The House became a girls boarding school in 1892 - then after 1926 it was a Roman Catholic convent - and most recently a Jewish co-educational school.
Posted by Chris Reynolds at 6:46 AM