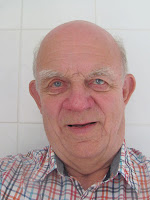 Thanks to everyone who has commented on my post Future Plans for this web site, which I have found helpful. My plan to cut back to one day a week on Genealogy matters during the summer seems to be working - as I managed still  17 posts in April - and page views of the Newletter are holding up well with over 5500 in April compared with an average of approximately 6000 a month between November and March. Visitor numbers to the main site are down a little compared with April 2012, but well up on April 2010 and 2011.

The first part of May could be a bit quiet as some time ago I booked a seat on a coach trip to the National Archives at Kew and I may well write a report on the visit for the site. However the trip - plus preparation and follow up - could well take up 2 days of the allocated "genealogy time" for May - but I would hope to get at least 10 posts in sometime during the month.

Limiting the "genealogy time" has given me more time to relax doing other thing - such as attending local U3A meetings and other social activities - and planning a short holiday in Devon during the summer. This will be for a special 50th anniversary - but will mean some work as I need to do some preparation first. I need to spend more time swimming and on more energetic rural relaxations as over the winter I put on far too much weight (blame the duck) and need to get back on course,

I should warn you that my other blog Trapped by the Box is looking healthier with page views exceeding 1200 page views in April. A few days ago I added a paper From the Neuron to Human Intelligence: Part 1: The "Ideal Brain" Model, which show the relationship between the research I was doing at University 25 years ago and modern brain research. If this creates a  lot of interest it could mean I have less time available for genealogy!
Posted by Chris Reynolds at 12:30 AM