The 1850s Account Book of William Brown, of Tring 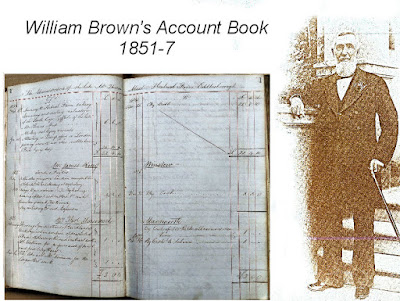 On 18th May the Tring & District Local History & Museum Society will be holding their A.G.M.in the Tring Parish Hall at 8pm - and I will be giving the talk. The official introduction reads: 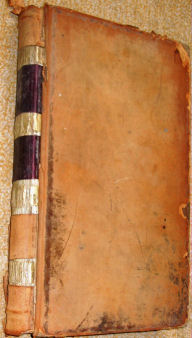 William Brown's client account general ledger contains a wealth of information relating to property in and around Tring, including the sale of houses and farms, valuations for probate, etc., relating to local families. A significant part of the volume deals with the management of the Tring Park Estate. Dr. Chris Reynolds is an amateur historian and member of the Society. He has lived in Tring for over 50 years, and currently runs the "Genealogy in Hertfordshire" website. This site includes many pages on Tring including a digitised copy of William Brown's account book.

Over the next three weeks I will be preparing the talk - which will be made available on the main web site, with supporting notes, after the event. Between now and then I will be posting some advanced "publicity" information on this blog. In addition you can go online and browser through the accounts and if there are any which particularly interest you (maybe they concern a property or individual you have been researching) add a comment below and I may be able to include a mention in the talk, or add notes to the web site after the talk.

After the talk the Account Book will be passed to the Museum for safekeeping - and will possibly appear in the document display cabinet.
Posted by Chris Reynolds at 7:39 AM No comments: 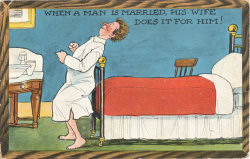 I have now located two more of the unusual comic cards that were being published by the Crown Publishing Company in St Albans in about 1908/9. I am still trying to identify the artists involved. One signed his name Karaktus and many of the others are in the style of "F S" who published many comic cards for the London View Company which closed in 1908.
Posted by Chris Reynolds at 6:13 AM No comments: 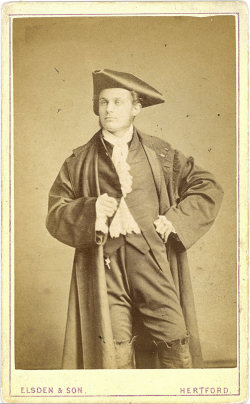 I have updated the information on some of the earliest photographers in Hertford.
The Monson brothers visited Hertford on two occasions in 1853. I have added further information to show how they were related and their later careers as photographers.
Thomas Vipond was another travelling photographer who visited Hertford in 1859/60. I have now discovered he continued as a travelling photographer for some time, based in Aylesbury, but later settling in Grantham. In 1864 one of Thomas's Aylesbury portraits was used by police to try and trace earlier activities of a pickpocket in other towns, which seems to be a very early example of the use of photographs in detective work.
In 1857 James Craddock set up a studio in Hertford with Hart (I have still not been able to identify Hart) but within a year the studio had passed to Arthur Elsden and James had "vanished" - except that I now know that he became a significant photographer in Simla, India, and that he, or one of his sons, was taking photoghraphs in England in 1880,
Arthur Elsden took over from James Craddock in 1858 and I have acquired an interesting carte de viste take in connection with a play "Payment on Demand" put on by the Hertford Grammar School in 1874. It shows "Vincent Elsden" but it is not certain which of the Elsden brothers, Arthur or James, it was. (Arthur Vinsent Elsden continued the Hertford photographic business after his father died.)


I would be interested to know of any surviving pictures from the 1850s taake by the above - or any other Hertfordshire photographer. Any earlier examples of photographs being used for detective work could also be of interest.

Posted by Chris Reynolds at 3:13 PM No comments: 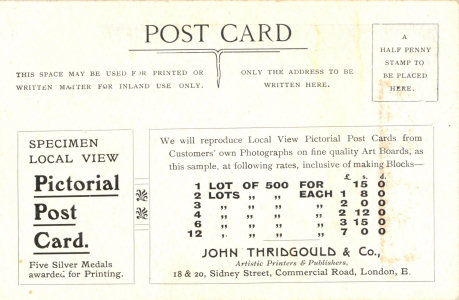 Thridgould was a major post card printing company - and the above price list shows how much it cost to get 500 copies of a post card published in about 1905.

One of the feature of the post card boom at the beginning of the 20th century was that many firms printed too many - and went out of business. Others found they had lines that did not sell well. In addition to printing cards Thridgould also obtained some of these surplus cards and did them up in assorted bundles at a knock down price.

For more information on this interesting firm see THRIDGOULD.
Posted by Chris Reynolds at 6:13 PM No comments: 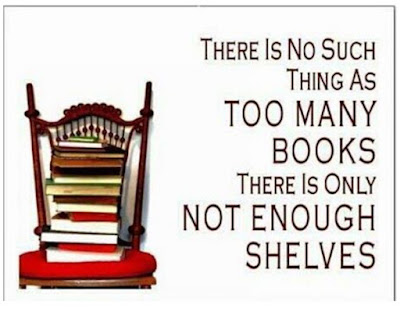 I really need to get my Hertfordshire collection of books, postcards, maps, et., into order - and every now and again I have a new start to get things done - and not only do I not have enough shelves - but I don't have enough wall on which I could fit the shelves ...
Posted by Chris Reynolds at 8:05 AM No comments:

Clare's ancestor, Robert Hendry, died at Mardocks (or Mardox) House, Wareside, in 1848 and I have been able to give her details of the house from when it was built in 1814 until it was demolished in 1863.  It turns out that Robert's employer was a solicitor called Edward Downs.

Posted by Chris Reynolds at 7:51 AM No comments:

I am currently sorting through my collection of post cards (mainly from the 1900-1920 period) and will be adding higher resolution images to the pages on the main web site. (If the frame round an image is blue click for a bigger image or redirection to a new page.). In doing this I will often include completely new pictures - sometimes to illustrate the work of different photographers and post card publishers.

Posted by Chris Reynolds at 12:24 PM No comments:

Who was a Rickmansworth Gold Medalist in 1901?

The detail, from a picture of "Bury Lane, Rickmansworth" by Albert Arthur Darrah shows a delivery cart circa 1910, but the only visible writing relates to the gold medal. So which local tradesman won a gold medal in 1901? Any ideas anyone?
Posted by Chris Reynolds at 9:04 AM No comments: