Merry Xmas and a Happy New Year to All
Increasing pressures this year on a number of fronts meant that taking time off to relax became a priority - with "keeping fit" walks a priority. Doing research helps me relax, and this year I found I needed a project that that had a significant "fun" element in it. Last October I told you that I was working on:

Who was "F S" and did he work in St Albans with "Karaktus"?


Since then, whenever I feel I need a break I can go online to ebay and search through the many tens of thousands of early 20th century comic postcards on ebay to try and unravel what looks like a complex story involving a postcard printer in Saxony , a wholesale stationer in Brighton, and several very short-lived postcard publishing companies!  Unfortunately there has been no progress in the original problem of identifying Karaktus. It is clear that the pages I put online in October will need a significant rewrite to accommodate the new. information - so expect a few mor ecomic post card blogs in 2017.

My wife and I are planning to enjoy ourselves over Christmas and needless to say Aylesbury duck is again on the menu.

Posted by Chris Reynolds at 7:24 AM No comments: 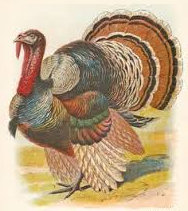 Half a century ago, when the income of a dissenting preacher in England was not very large, his salary was often supplemented by a bountiful of provisions from the well-to-do members of his congregation. A Baptist minister in Hertfordshire used at Christmas time to be positively inundated with hampers filled with good things. On one occasion an enormous turkey was sent to him by the thoughtful kindness a neighbouring farmer; but, as the minister's family had already provided for the Christmas dinner, the bird was sent into the market and sold. A passer-by, seeing this fine specimen of poultry, said, "What a splendid turkey! Just the thing for the parson's Christmas dinner." And to the "parson it was sent. The prudent wife sent it second time to the market, and sold it again for a handsome sum. Another friend, similarly struck with the magnificent proportions of the turkey, purchased it, and also sent it to the " parson." Not wishing to fly in the face Providence, the good man said, last, " It very clear that the Lord means us to have this turkey" and, with the entire approbation of the family, it formed part of the Christmas dinner.
From the Aldershot Military Gazette 18th October 1875
Posted by Chris Reynolds at 5:34 AM No comments: