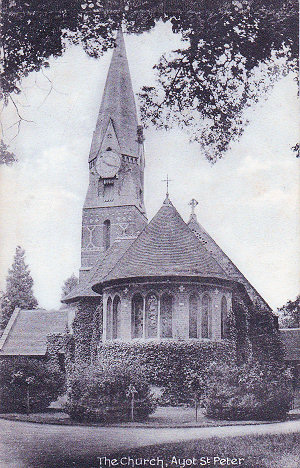 I recently discovered that there is an new site for the parish of Ayot St Peter which includes a number of interesting local history pages, which are planned to expand with time.

I have used the event to celebrate by upgrading my own Ayot Green and St Peter page, and introducing a new page for the church. As a result all the old postcard views (1 dozen of them - 2 of which are new to my site)  now expand to a 1024 pixel wide (or high) image if clicked.

This is part of my plans in preparing the whole site for archive and if you are interested in any Hertfordshire village (or part of a town) and would like me to add large images from my own computer (but which I have not yet made available online) please let me know and I will give your suggested village priority in what is a long queue of potential upgrades.

In addition any corrections, new or updated links to other village, town, or society sites will be help me ensure that the final archive is of maximum value.
Posted by Chris Reynolds at 7:46 AM No comments:

Photograph taken in Letchworth Garden City in about 1910? 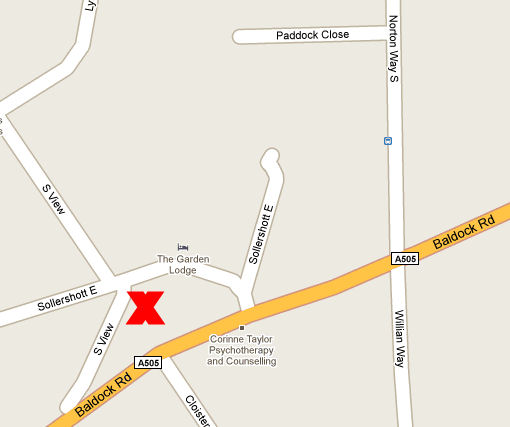 Can anyone confirm my original suggestion - either by comparision with other old photographs - or by visiting the site and taking a picture of what is there now?

Posted by Chris Reynolds at 6:58 AM No comments:

I've been on a very special holiday in Devon

For my 80th birthday my son decided to treat us to a stay at a luxury hotel in Devon, a few miles from where my wife and I had grown up as children. Bovey Castle is situated in an attractive wooded Dartmoor valley with gardens running down to the River Bovey and is a good place to relax away from the worries of the outside world - as it is so sheltered that mobile phones do not work (but if you are desperate to keep in touch there is WiFi).

The service and food was everything you would expect from a top hotel and it was a pleasant place to relax, wandering round the grounds, having a cream tea in comfortable arm chairs by a log fire, and bathing in the elegant indoor swimming pool. The hotel comes with an 18 hole golf course and other activities available included an introduction to fly fishing, feeding the deer, archery, air rifle shooting and cider and sloe gin making. However we only attended the falconry display as we had planned our own tour of the Dartmoor - and I had a special reason (see later blog post) to take the family to an Indian Restaurant in Newton Abbot. In addition we took the opportunity to meet up with some old friends before we returned home.

While there I took a whole series of photographs of the building, the gardens and the garden ornaments and posted them on Geograph, as a record of the place. The place is well worth a visit and details are available on their web site.
Posted by Chris Reynolds at 8:55 AM 1 comment: 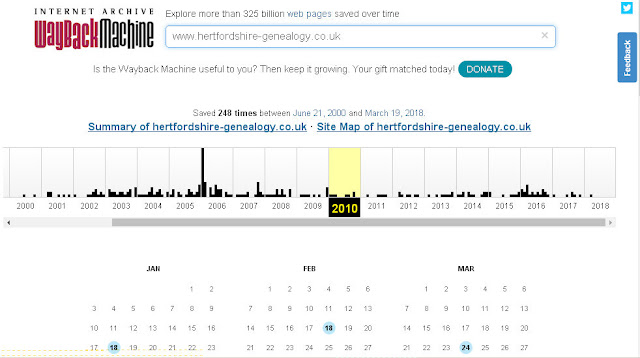 I have just been asked about saving the "Genealogy in Hertfordshire" web site on the Wayback machine - and I have recently been involved in discussions within the Tring Local History Society about consolidation various Tring local history digital records to ensure that they remain accessible when the current owners are no longer in a position to support them. This suggests that it might be appropriate to try and develop a county wide policy for archiving the scattered web sites of local historians and societies. However for the moment I will just say a little about the Wayback Machine and how it relates to my web site..

www.hertfordshire-genealogy.co.uk  has been automatically monitored by the Wayback Machine since 2000 and pages have been captured on 248 occasions. The first pages captured are from 2000 - when it was a bulletin board - but on retrieving them you only get the page framework and the actual bulletin posts, which contain the historical information, are missing.

The site "Genealogy in Hertfordshire" that most people are familiar with, started in April 2001 and a check shows that several extensive snapshots of the site were taken then. I have looked at the later April archive and clicked through a number of pages - and it is possible that the whole site has been recorded as it was originally created. A similar very limited spot check in November 2001 failed to reveal any missing pages.

A check at the end of 2005 showed that while many pages were present, sections such as the pages containing a copy of the the booklet "Tring in 1947" were missing. On the other hand my WW1 talk on "The Terriers in West Herts" appears to be present, and possibly complete. It is clear that Wayback was only archiving a sample of the pages at this date.

By 2010 Wayback was only visiting the site about 4 times a year - and a check shows the Home page with the picture missing. However a quick check showed it was possible to follow some of the menus and interestingly the "Tring in 1947" pages were now accessible, so may have been archived between 2005 and 2010..

There has only been 1 snapshot in 2018, up to the end of March. The main entry page has two pictures missing but it is definitely possible to navigate through parts of the site. However it looks as is there is a limit to the depth of nesting of links and most of the pages and pictures relating to my recent research on the St Albans post card artist signing his name Karaktus had not been archived. I also suspect that many other pages, which were archived years ago, may not show recent updates. Two links on the home page are interesting. The link to the "Hertfordshire News" blog takes you to an archive copy of the blog (sampled 17 times since 2013). The link to "A Guide to Old Hertfordshire" took ages to load the google map, and if you click on a flag on the map it appeared to take you to the correct page - but it was NOT an archived page but the current live page!

The above observations fit in with what I have found, over the years, when looking for local history sites which had suddenly gone offline for some reason.In some case this was because the author/owner had died and the ISP subscription had lapsed, and in other cases the local history pages had been part of a bigger site, perhaps run by a parish council or a church, where the site had been "brought up to date" and the pages of historic information lost when the new version of the site was introduced.

In fact the Wayback machine can be asked to archive single web pages and a test this afternoon recorded one page where only the text and some of the pictures had been archived in March. The page is now on the Wayback machine - with all the pictures - but none of the links to supporting pages have been followed up and archived. This seems a good way to archive single stand alone pages - each of which will have a unique permanent URL. However over the next few weeks I will do some tests, followed up by retrieval requests a few days later, on some of the missing parts of my web site and report on the results.

In addition Wayback also offer a subscription archiving service which will regularly scan and update the archives of selected web sites. This seems to be aimed at major libraries and Universities - for instance to archive web sites linked to particular research projects - and would not appear to be suitable for use by large numbers of individual local historians. However it might be possible to co-ordinate web activities across the county - with one organisation (perhaps HALS?) being responsible for selecting what local sites to archive.

Any ideas anyone???? - Comments would be helpful.
Posted by Chris Reynolds at 7:58 PM 3 comments: