Anthony recently contacted me about his ancestor Jonathan Cox (1821-1881) of Hill End Sandridge - which means that we share William Cox (1760-1802) as an ancestor. When I have more time I will update the earlier ancestor pages but in the meantime I had a look to see if there was anything new about Jonathan on the British Newspaper Archive.

Jonathan Cox is mentioned several times in my account of the Sandridge Agricultural Strike of 1873 and in particular he told a parliamentary commission that “Men work 11 hours a day, and women nine. … Able-bodied labourers have from 11s to 14s a week; boys from 3s 6d to 5s. … boys rarely go to work before they are from 10 to 12 years of age. … Girls are not employed in farm labour, they are engaged in straw plaiting from a very early age. Women, too, are chiefly engaged in plaiting. A few are employed on farms in weeding in summer.”

I therefore decided to look for news item which related to the people he employed.

In 1861 one of the young men that he employed on an annual basis, almost certainly through a hiring fair absconded:


Leaving Employment. - Henry Peters, a lad in the employ of Mr Jonathan Cox, of Hill-end Farm, Sandridge, was charged with leaving his service. - Mr. Cox informed the Bench that the boy had left his employment on a former occasion, which he overlooked, he being a yearly servant. - Defendant pleaded guilty, and was ordered to pay 17s 6d costs, and return to his work. - His master paid the money which was to be deducted from his yearly wages.

In 1871 one of the young men he employed stole some money from another and the court case included details of what he was paid:


Joseph Mardell  (16) was brought up in custody on remand, charged with stealing 6s. 6d, the property of Isaac Matthews, a ploughboy in the employment of Mr Jonathan Cox, Hill End Farm, Sandridge ... Mr Cox stated that the prisoner was employed at 4s 6d a week and £2. 10s. annually ... ...

In 1875 William Chapman was not paid enough for his work at harvest time . Jonathan Cox took him to court for reach of contract but iam has legal support and it would seem that Jonathan Cox dropped the charge when he realised that his foreman would be required to give evidence. I am sure this would not have happened before the strike. 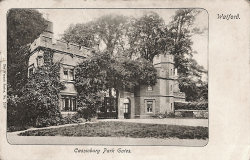 Allen Warren has written from Canada to say that he is compiling a catalogue of all the post cards by Wrench from the early years of the last century He has provided a list of all the Hertfordshire cards and I have used this to update my Wrench page. He has also provided a copy of this view of the Gates on Cassiobury Park, in Watford.

There are a number of Hertfordshire cards which he has not identified:

If you can identify any of these cards please let me know (ideally with a digital copy) and I will forward the information to Allan.
Posted by Chris Reynolds at 9:54 PM No comments:

Over the last 150 years a vast number of pubs and beer houses in Hertfordshire have closed - although a fair number remain (possibly with a name change). If you are interested in the history of one of these establishments you should start by looking at the UK Pub History and the Lost Pub Project.

Pubs were at the heart of most communities and there were often incidents involving them and their customers. In addition it was not unknown for an inquest to be held in the public house nearest the death. There are also licensing. applications - particularly when a new landlord is appointed. Such matters were frequently covered in the local newspapers - many of which are available online in the British Newspaper Archive.

Once you know the name of the publicans from the above sources you will often be able to get more information from the censuses between 1841 and 1911.


Because I am having to spend less time on running this web site I would appreciate it if, in future, you check these sources before you ask me questions about a pub's history.
Posted by Chris Reynolds at 11:19 AM No comments:

The British Newspaper Archive has just loaded copies of the Sporting Life from 1859 to 1909.
So far I have only had time to do a very quick check to see what is there related to Hertfordshire and found the following entry from May 1860. If you find anything of interest let me, and other readers of this blog, know by commenting below. 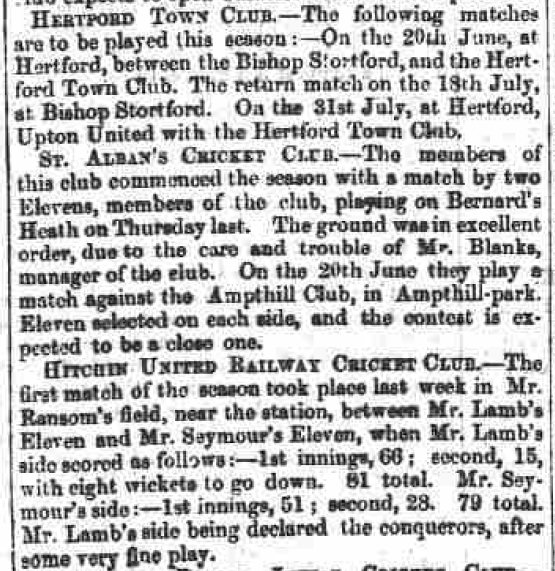 Posted by Chris Reynolds at 8:46 AM No comments: 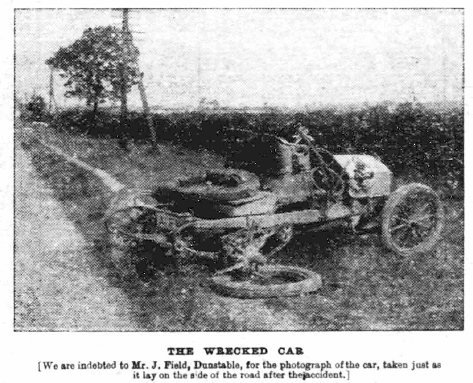 Several years ago I gave a talk (copy online) on The Road through Harpenden and since then the Bristixh Newspaper Archive has come into existence - making it far easier to get details of dated events. Recently Peter has asked where more information can be found about the fatal accident near Dunstable.that I mentioned in the talk and as a result I have updated the original page on Early Motor Cars to include details of both the Dunstable accident and also the earlier hit and run accident at Markyate where a 5 year old boy was killed.

Posted by Chris Reynolds at 11:28 AM No comments: