A Post Card with surprising Football and Princely Connections 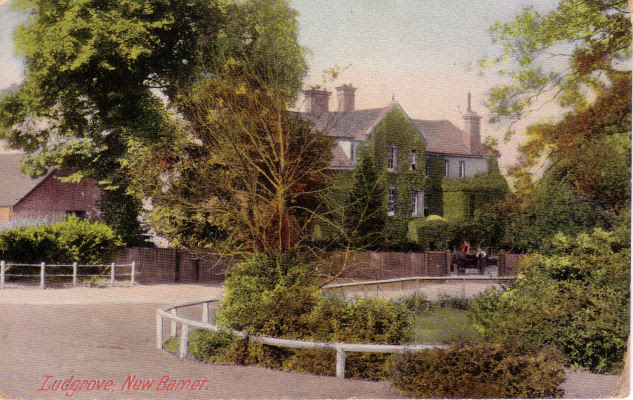 Les is the webmaster of the Hadley Common web site and he sent me this post card of a house called Ludgrove in the Parish of Monken Hadley. He asked me if I could date it and I could have easily dismissed the request on the grounds that it was only in Hertfordshire for a period of 60 years during the early 20th century. However the immediate task was simple - The card was a KROMO card by the famous post card pioneers Blum & Degan. They published many views of Hertfordshire and the KROMO card series was started in 1905. Unfortunately for them, but helpfully for answering the question, they went bankrupt in 1908 - so the card can easily be dated to about 1906.
My first reaction was that the house looked like many others that were springing into existence in Middlesex and South Hertfordshire a century or more ago and I really needed to say something more about it before posting details in this Newsletter, or writing a special page on the main web site. So I decided to dig for some background and the more I dug the more interesting the house became.

To begin with it was hard to find.  Prior to 1904 it was in Middlesex, and I found two Middlesex references to an Arthur Dunn, who had a private boys school at Ludgrove, at the end of the 19th century. A search after 1904 in Hertfordshire directories drew a blank (perhaps the school was very private ...) so I looked for Arthur Dunn in the 1901 census and found his and a large number of boarding pupils from all over the country. So clearly it needed to be cross-referenced to the Education pages - and perhaps some of the pupils later went on to become famous.

I failed to find Arthur in the 1911 census and while looking for what happened to him I found a page on Wikipedia - describing his role as a footballer. He was in the England team winning matches against Ireland, Scotland and Wales, twice as captain. Following his sudden death in 1902 the Arthur Dunn Cup for Old boy teams from English Public Schools was created - and is still going strong.  In addition, after his death the school continued, now in Hertfordshire (due to boundary changes) under two more English football captains, Gilbert Oswald Smith and William John Oakley.

This was getting even more interesting - so I wanted to know what happened to school - and found that in 1937 it moved to Berkshire, and became, if possible, even more special - in that its post Hertfordshire alumni included Prince William, Prince Harry and the Duke of Kent.  It made me wonder, even more, who were the pupils listed in the 1901 census (and also in 1911) and whether these are any famous people who where taught there when it was at its Hertfordshire address. I spotted a few names but unfortunately I do not have the time to follow this trail further. If, on looking at the detail report on the main web site, you recognise anyone else who made it to Wikipedia. why not let me know.
Posted by Chris Reynolds at 2:19 PM