The Bucks Herald prints a report from the Front about the Hertfordshire Regiment  which includes the following:
All reports received show that the regiment displayed great gallantry in the face of great odds end terrific artillery bombardment.    They have not come through scathless, as they have lost 15 killed and 35 wounded, 4 seriously. The full list has not yet received, but among the known wounded are:
Lieutenants Boyd (injured hack) and Hunt (shock).
Private Capel (Kimpton),
F. Brockett (Hitchin).
L. French (Hitchin).
T. Foster (Hitchin).
W. Wilkinson (Letchworth),
A. Garner (Letchworth).
Corporal Broadman (Letchworth).
Lance-Corporal T. Weston (Royston).
Private B. Kent (St. Albans),
Sergeant C. Garment (St. Albans).
Private E. Brown (Hertford'),
Corporal Kettle (Watford),
and Privates Reid. Castle, and O'Brien.
There is also a long list of men from Tring who are involved in the war effort  (in most cases with their units, and letters from the front lines by local men. Another account shows how Monsieur Rayée and his family came over from Belgium and have settled into a house in Park  Road, Tring. 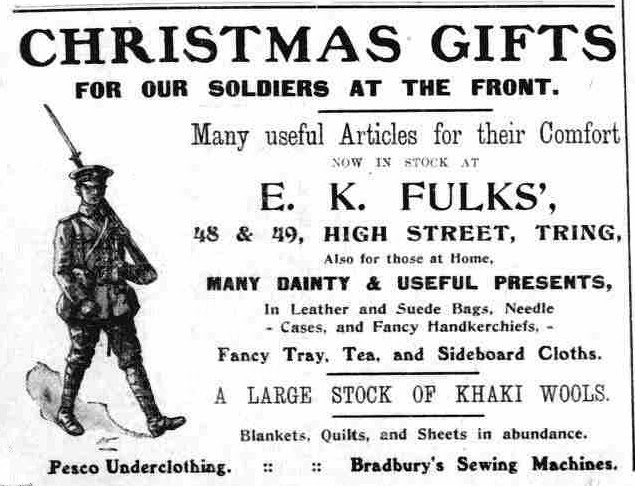 For Full details see the Latest Old Tring News
Other Tring "Old News .
Posted by Chris Reynolds at 6:26 AM