100 years ago this week - A German Spy in Tring?? and other News stories 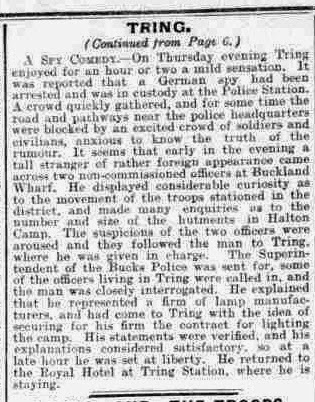 A lot of news this week - with War related news turning up all over the place.

There was a scare about a suspect German Spy. On the war front there were additional names for the Roll of Honour for Tring and Wigginton, and some casualties such as Private Edwin Dell who was wounded and in hospital while Harold Gurney was suffering from frost-bite in the feet. The men of the 21st Division (the 62nd & 63rd Brigades billeted in Tring) were taking it in turn to take leave while Lieut. G. Macdonald Brown was unstinting in his praise of the behaviour of the Herts Regiment men at the front. Recruitment to the Volunteer Training Corps was reported as being slow.

William Brown was advertising furnished houses near Tring and Halton - which could have been in demand where married officers wanted their families nearby during training. The Urban District Council met and in addition to routine items about a polluted pond in Grove Park, the Brook Street Sewer and a new School Manager, there were military references when discussing the Isolation Hospital and the refuse collection.

Of course everyone was preparing for Christmas, with many adverts, and I reproduce a typical one by Jacklin, a news agent, and another tuned to the war theme with the headline "War on Pain." People (including the Belgium refugees and the soldiers billeted in the town) had enjoyed Miss Darnell singing at the Gem Cinema as well as watching the films. The hare coursing season had just begun and after a good day (not so good for 14 hares) the party relaxed in the dining room of the Royal Hotel, at Tring Station - and a collection raised £1 4s for the War Fund.


On more routine matters the paper reported on the death of the Oddfellow, Thomas Dudley (55) who worked in the Tring Park building department. There were Diocesan reports of the village schools atLong Marston and Wilstone, and records of the milk production of the Shorthorn and Jersey herds at Tring Park.

See the Latest Old Tring News
Other Tring "Old News .
Posted by Chris Reynolds at 8:08 AM