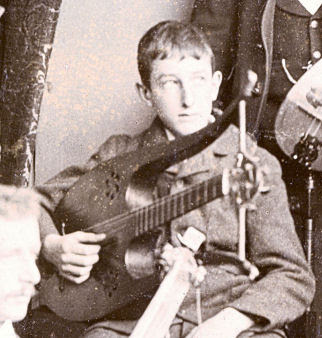 I am trying to get as wide a range of pictures by Frederick Downer, of Watford, to illustrate the various ways in ehich photographs were used in the late Victorian and Edwardian period.

My latest addition shows a group of musicians holding various instruments from the mandolin family. Most look normal but is this a special kind of mandolin - or is it a lyre-guitar?.

And of course there is the question of the identity of the group. Were there a group of mandolin players in the Watford Area in the late Victorian period - or was it a group which was performing in the  theatre? If (when) the Watford Observer goes on line in the British Newspaper Archive it may be easy to answer this question, but in the meantime can anyone help.
I have seen a 1895 reference which suggests that Fred Downer might have had connections with the Watford Conservative Club Dramatic and Musical Society. Might this have been one of their productions?
Posted by Chris Reynolds at 8:00 AM