When I posted the following I felt that I had to find an excuse to make no further postings over Christmas, in part to allow me to enjoy Christmas and in part because I was hoping to have some unrushed time to get used to a new computer. What I hadn't realised was that I was also heading towards an attack of the "dreaded lurgy" to be followed a couple of days later by my wife. It would seem that the lurgy was already gnawing at my mind when I posted this "Christmas Competition" and it was only when Peter sent an excellent high resolution photograph of the of Water End Girls and Infants School in North Mymms  taken around 1900 that I realised that the "significant differences" I has spotted were not real.

I will post a full and corrected report in the New Year (I now need the break more than ever) but having said I would make a generous donation to sites charity collecting box for the Herts Mind Network I have now made such a donation. I am also posting a request for information relating to the First World War, which started 100 years ago next August, and to encourage you to help I will be making a further donation.
++++++++++++++++++++++++++++ 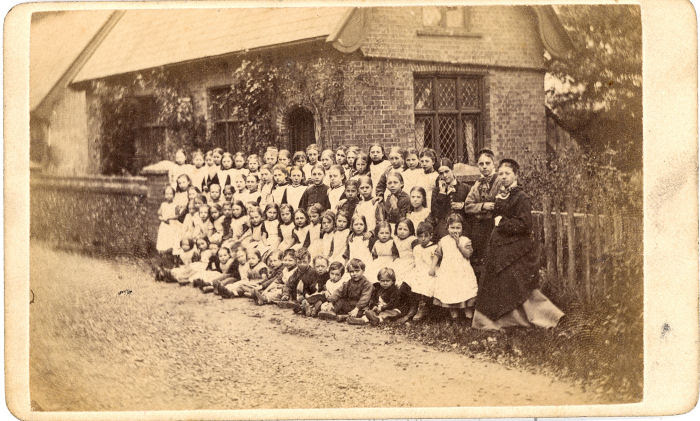 This picture of a school was taken in the late 1870s by a photographer, G. A. Nichols, who gave a Hitchin address on the back of the carte de visite.

It was posted on the web site some time ago when I asked about its identity. A few days ago my attention was drawn to a post card, published in about 1905, by a St Albans photographer. At a quick glance the two pictures appear to be the same school.

Have a look at the larger images on the main web site and let me know what differences there are - and in each case indicate whether they are simply changes that could have happened between about 1875 and 1900 - or whether the differences indicate that the pictures are of two different schools.

For those of you who know parts of Hertfordshire well, or who have old pictures of Victorian schools in the county there are some additional questions - about the possible identity of the school(s).

Due to the need for a break, a long list of social activities, and some time devoted to getting used to Windows 8, this will be the last post on this Newsletter until the first week in January, when a report on the results of the competition will be posted. There may be a similar delay in responding to any queries.

Posted by Chris Reynolds at 8:18 PM