The Herts Imperial Yeomanry at Berkhamsted in 1906

The above card, and its partner, show the Herts Imperial Yeomanry Training Camp, which was held at Berkhamsted in May 1906, and many on the men shown would undoubtedly been fighting in the First World War a few years later. However card had some other interesting features relevant to this site. Both were taking by Frederick Downer, a pioneering Watford photographer - and I have opened up a new page to bring together his military photographs. 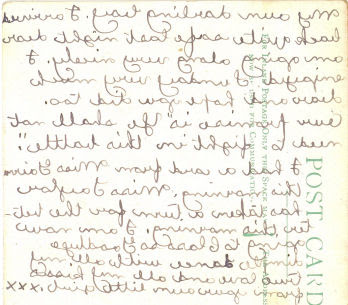 In addition the cards carried hidden messages in mirror writing, so that they could not be so easily read in transit, and prove to be affectionate letters from Jessie Louisa Smith, and her husband to be Thomas Lance Simmons, a Watford hairdresser.
Posted by Chris Reynolds at 4:26 PM