"A County at War, Hertfordshire" premiered at the Rex at Berkhamsted

The Lord Lieutenant of Hertfordshire,  the Countess of Verulam, commissioned a DVD "A County at War, Hertfordshire" and yesterday it had its premier showing at the Rex Cinema, Berkhamsted.

As no First World War cinemas are still operating in Hertfordshire the Rex was a most suitable venue.  It has a wonderfully preserved Art Deco auditorium which opened in 1938 and closed in 1988. However it was saved from demolition and now run a regular program of old classics, modern releases and special events. My wife and I sat down at a table with drinks and canapes and the program opened with First World war songs by the OVOcalists from St Albans. 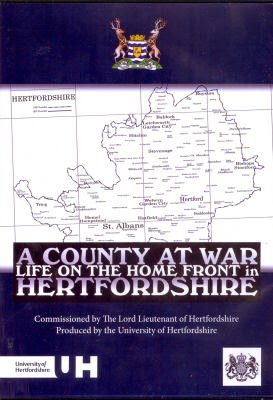 Lady Verulam briefly came on stage and introduced the DVD and the show was underway. The result was a well edited series of scenes, some from old postcards, some from surviving film, some press reports and some useful animation. Everything was kept moving along with a good commentary. The Director, Howard Guard has clearly done a very good job. (A review of the DVD will be appearing on this site later).

The evening ended, appropriately, with the playing of the Last Post.

The Director wishes to thank Christopher Reynolds of Herts Genealogy, whose book and collection of photographs in The London Gunner came to Town was invaluable in the making of this film.

Posted by Chris Reynolds at 8:13 AM