I have decided that over the next few months I will post selected chapters of The Soldier's Tale from The London Gunners come to Town in pdf format with all the original pictures and footnotes. There are some technical problems but the long term plan is to put the whole book online.

The first is Chapter 16 - To War Station at Hemel Hempstead (pdf) which describes the preparations to the move to the StAlbans area of Hertfordshire, as seen from the military side. The subheadings are:
The chapter identifies a number of the officers who came to Hemel Hempstead. 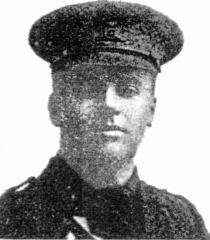 Major (later Lieutenant Colonel) Adrian Charles Gordon (1891-1917) is introduced in this chapter - and he is the soldier who provides the linking thread in The Soldier's Tale. One of my big disappointments when I wrote the book was that the only picture I could find of him was a thumbnail sized printed image of a very poor quality. I even tracked down his one surviving twin daughters, to find her in a nursing home, without a single family photograph. (She was actually too young when the war broke out to remember her father.) It's a long shot but if anyone has a better one.....


Sample Extract  below the fold

The 7th Brigade, with Second Lieutenant Pilditch’s collection of oddments trailing in the rear, marched up Fulham Road, and past Hammersmith Broadway and continued on the Hendon Road.

About midday, when we were all tired, dusty, and very thirsty, the column halted at the Welsh Harp, Hendon, and the horses were watered at the ponds. It was a strange sight, hundreds of horses being ridden into the lake. Luckily there was plenty of room. ... After about an hour there, and a sandwich and drink, we harnessed up and started off again. I found I had almost doubled the lot I started with. ... We went along a broad road past Edgware, Stanmore and Bushey. We created lots of interest everywhere. People ran to windows and garden gates. ... Later on in the afternoon it got baking hot and I had to put the men up on the horses and make them walk in turn. ... Near Watford people came out with beer, and water, cups of tea, apples, bread and butter and all sorts of things for the men. ... Some angels in human form had taken a restaurant and gave us all free tea.

The dismounted men began to straggle and get into pubs and sit down. ... Some were so bad that I got them a lift in the Doctor’s cart. Many of the horses, too, showed signs of wear. ... [At Kings Langley] we halted for twenty minutes until most of the men were up and then started a sort of “March to Kandahar” at about two miles an hour, me walking in front leading Marie by the bridle. ... They certainly came along the last miles
wonderfully well; poor devils, it was a stiff march for a start, all fresh and soft as they were. Thirty four miles at least and on a baking day.

Pilditch arrived at Boxmoor at 10.30 p.m., and returned the wagons to their various batteries. The 18th Battery lines were on the common at Boxmoor, and after tying up his horse to a gun wheel, he went to the nearby Heath Park Hotel. There was considerable confusion there, and he spent the night wrapped in a travelling rug and sharing a bathroom with a fellow subaltern, Second Lieutenant Pixley.
Posted by Chris Reynolds at 8:47 PM