Anti-Aircraft Guns in Hemel area in 1918 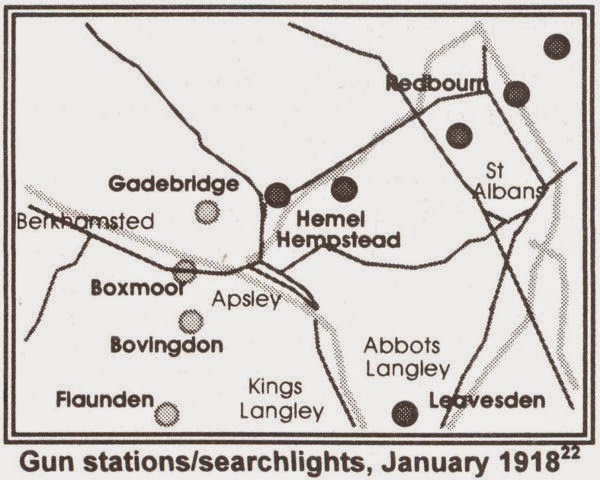 Some of Harry Chandler's memories of Hemel Hempstead during the First World War have been posted on Facebook. He mention the searchlight and anti-aircraft gun east of Randall Park. These installations are described in The London Gunner comes to Town as follows:

In the autumn [of 1917] the plans for the air defences of London included a ring of anti­-aircraft guns and searchlights which were stronger to the north and east of the city. Several smaller units were based in the Hemel Hempstead area and the Management and Estates Committee asked Waiter Locke to negotiate with the military authorities about the proposed searchlight station in Randall Park. This was the westernmost of a series of 3" 20cwt gun stations and searchlight posts which stretched across Hertfordshire. The western approaches to London were defended by searchlight stations armed with 18 pounder guns (a modified version of those being used by the Royal Field Artillery in France). These formed a line starting at Gadebridge. and running south through Boxmoor. Bovingdon and Flaunden. It seems very likely that these guns were never used in anger, as no later German it attacks, either by Zeppelin or aeroplane, came so far west.

Posted by Chris Reynolds at 7:46 PM