I recently noted that some interesting ephemera linked to Solesbridge Paper Mill, Rickmansworth was appearing in dribs and drabs on ebay and decided to purchase a small cash book to see what was going on, so that as much of the relevant history as possible could be saved.

The book was owned by the Mill owner, George Austin and in early 1877 it was used to record payments to customers (presumably for paper products) and his two biggest customers were the printers of the Hemel Hempstead Gazette and the Watford Observer. However from 1878 to 1887 it was used to record how much money his son Herbert James Austin had loaned the business, (by not taking his weekly wages) and how much Herbert had drawn back for essential purchases. The payments stopped when Herbert was married, and it was only in 1887 that George gave Herbert as promissory note for the remaining balance - which was never cashed as George went bankrupt. 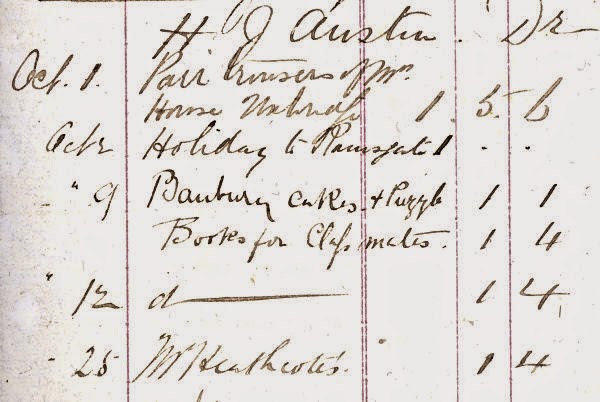 For a list of George's customers in and around Hertfordshire, and some of the ways Herbert spent his money see  George Austin's Cash Book.
Posted by Chris Reynolds at 6:46 PM