The story behind an charming Carte de Visite from Hitchin 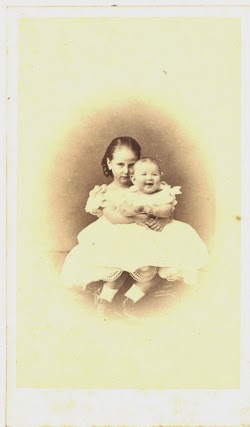 This CDV is by Thomas Benwell Latchmore, who was Hitchin's most significant photographer. Like the majority of such cards this one is is undated - but fortunately it has the names on the back.

So who were Lucy Hensley & Agnes? a quick check online shows that Lucy Hensley was born on  3rd July 1859 and baptised on 10 August at Hitchin. Gertrude Agnes Hensley was born 14 April, 1864, and baptised on 18 May. My estimate of Agnes's age is about six months - which means that the photograph was taken by Thomas Latchmore in about October 1864 - which means  it was one of the earliest photographs he took in his Bancroft Studio - providing a key date on Thomas Latchmore's time line.

The girls baptisms were carried out by their father - who turns out to have been the vicar of St Mary's Hitchin between 1856 and 1905. I therefore decided to draw up a detailed time line  for Lewis Hemsley to demonstrate  how useful the British Newspaper Archive can be is reconstructing someone's life. One sad incident was that when a daughter was born the birth notice was sent off to the papers immediately - only to be followed the next day by the daughter's death notice.

One interesting observation is that, despite being vicar for virtually 50 years he is hardly mentioned at all in Hine's books on the history of Hitchin. Admittedly Hine concentrated on the non-conformist churches - but it suggests that the Rev. Lewis Hemsley may have noy play a significant part in the life of Hitchin as a whole.

More Information of Thomas Benwell Latchmore and his photographs
More information on Rev. Lewis Hemsley and his family