Who "stole" the Four Swans Inn, at Waltham Cross in December 1835? 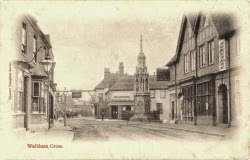 About 4 years ago Nick wrote asking me about his ancestor, Joseph Tydeman, who was the landlord of the "Four Swans Inn", Waltham Cross. In answering him I listed the landlords of the ancient coaching in from 1839 to 1937. (See TYDEMAN, The Four Swans, Waltham Cross).

Recently Alison wrote to tell me that Thomas Childs, who dies in 1835, was the landlord of the Four Swans Tap, which was a beer house associated with the Inn. Sarah Childs died shortly afterwards and the two will mention a John Monk and a Henry Heward, landlord of the Falcon Inn. As the British Newspaper Archive is now available I decided to investigate the earlier history of the Inn.