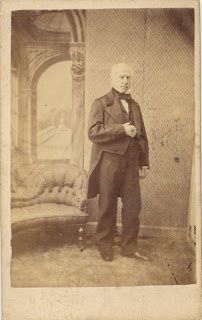 I recently purchased a small pile of carte de visite by various Victorian photographers from Hitchin. In no case was the sitter identified but I set about trying to date them. Much to my surprise, and with the help of the British Newspaper Archive, I was able to date this card to between September and November 1863, although I still have no idea who the gentleman is. 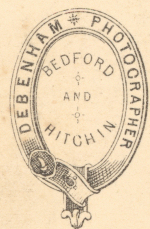 The logo on the back says the photographer was a Mr Debenham, of Bedford and Hitchin and a search of the Hertfordshire Express and General Advertiser revealed that Mr Debenham, of Tilehouse Street, started taking portrait pictures in Hitchin in September 1862, having already taken a number of pictures of stately homes around Hertfordshire. He used a glass house fort the purpose (to make the most of available light) and a newspaper advert records that he moved the glass house to somewhere near Hitchin Town Hall in October 1863. Meanwhile the Bedfordshire Mercury and Bedford Times and Independent record that at the beginning of October 1863 he opened up a glass room studio in Harpur Street, Bedford.

Adverts continued in the Hertfordshire Express, mentioning both the Hitchin and Bedford studios until the 5th December, but on the 12th December 1863 the following advert appeared:

George Avery then advertised in the Hertfordshire Express for a suitable house for use as a studio, with later adverts relating to his studio in Brand Street, Hitchin. The batch of CDV also contained one of George Avery's portraits (as judged by the negative number) - and the back was an applied label - possibly covering up the Debenham logo. 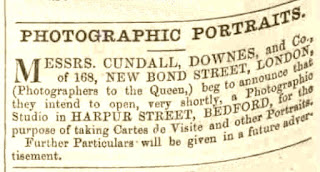 There is no explicit information on what happened to the Harpur Street, Bedford, property but the following advertisement from the Bedfordshire Times of 28th November 1863 suggests a possible outcome. Whether Cundall Downes & Co acquired the buriness - or whether it was abandoned when the Hitchin studio changed hands is unknown is unclear from the press reports. However it would seem that any CDV mentioning both the Bedford and Hitchin studioo would only have been appropriate for a couple of months starting at the end of September 1863..

What is clear, from a news report in the Hertford Mercury and Recorder, is that by March 1864 Mr Debenham had moved to 10 King Street, Luton, and had gone to look for a gas leak with a lighted candle! Fortunately no-one was seriously injured and the Luton News later carried a number of his adverts - the last being in January 1869, Other sources reveal that by 1870 his three photographer sons were all following their career in other parts of the country.

In 1870 the following advert from the Hertfordshire Express showed that George Avery and sold the business to T B Latchmore.

For more information see biographies on Debenham, Avery and Latchmore.