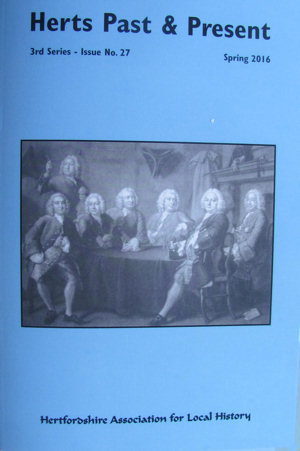 This has just been published by the Hertfordshire Association for Local History and contains the following items which will interest local historians:

Entrepreneurs and Rebels looks at the people who lived in Ware in the 14th century. Such research is greatly aided by the amount of information on web sites such as www.medievalgenealogy.org.uk

Robert the Mason and his legacy looks at what is known about the man who rebuilt the original Saxon church at St Albans. As a result of his work St Albans is the only major church in England with a great crossing tower of the 11th century still standing.

Benn's Club of Aldermen is the name pf a painting, dated 1752, in the Goldsmith's Hall, in London. This article examines hoe a grocer's boy from Puckeridge ended up in such exalted company.

Vincent van Gough's sister in Welwyn tells of the search to find which house the sister of the prominent painter lived for a short time during the 1870s.
Posted by Chris Reynolds at 3:14 PM