Prize Fighting on No Mans Land in 1833 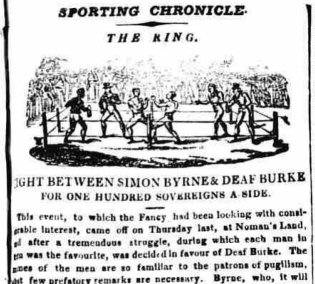 Following a useful correction from John I have added some useful references to prize fighting and a brief extract from a lengthy press description of the fight, which led to the death of Simon Bryne.

In the five following rounds, both fought in a wild and scrambling manner, equally exhausting to each; and in the 49th round Burke, who had summoned all his remaining vigour to his aid, rattled away with such fury, that Simon at last went down weaal. Here was another change - and Burke again became the favourite. From henceforth to the 99th round, repeated changes took place.

More information on No Mans Land
Posted by Chris Reynolds at 7:16 AM