The Cricketers Public Houses of Hertfordshire 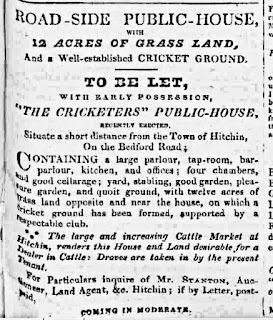 Noeleen has written to say I found your site via Google after I could not read an address in a census. It turned out to be ‘The Cricketers’ in Bennington. In 1851 and 1861 census  Frederick  Parkins was the Victualler and a Shoemaker with his wife Sarah. He was just a Shoemaker in 1841 census. In 1861 it is listed as Cricketers Public House, Bennington Road. By 1871 and 1881 census he is Publican and Shoemaker at the Green Dragon in Waltham which his wife Sarah was head of as a Widow in 1891 census. I hope this is of interest to you and I loved the addition of a shoemakers occupation plus I enjoyed reading about Cricketers Pubs on your site, something unknown to me in NZ.

I have added her comment to the page on the Cricketers pubs I first posted in 2006, together with some relevant news items from the British Newspaper Archive.

In addition I have added an advert relating to the Cricketers public house in Hitchin from 1836 which records that the associated cricket ground was well established at that date. I have also added a Licencing Day report for St Albans for 1884 which mentions The Cricketers in that city (which unfortunately no longer trades under that name).
Posted by Chris Reynolds at 8:17 AM