Another Post Card solves the Mystery with a Kiss!

Last November I reported on a very faded post card of of guns at a military camp, sent to a Miss M Rowe by "J" and suggested the likely identities of  Miss "M" and "J". 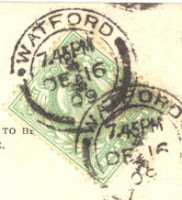 Now another card has turned up, showing guns at Lydd Camp, also sent from Watford to Berkhamsted. This shows that the "M" I suggested was Miss Margaret Rowe was called "Madge", while the "J" I provisionally identified as James Humphries was called "Jim." In addition Jim attended a "drill" which supports the idea that he was in the Territorial Force. For more details see Mystery Military Photo

However I also discovered I had missed a clue with the original card - by not wondering why the stamp had not been stuck on straight. When the second card turned up with the same configuration I started to investigate and it turns out that in the "Language of Stamps" a stamp stuck on in this way can mean the equivalent of "love and kisses."
Posted by Chris Reynolds at 7:00 AM