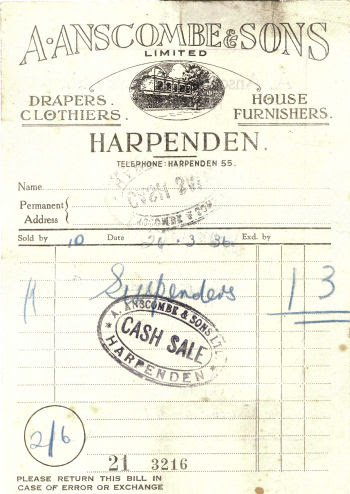 Even an old receipt such as this one can tell a story. It reminded me of a large department store near my home in the 1940s where the salesman put the sales slip (in this case for suspenders costing 1s 3d) in a tube with the customer's payment (in this case half a crown - or 2s 6d). The tube would be clipped to a wire and sent whirring overhead to the cash office - to return with the receipted bill and the change.

So there must have been a similar store in Harpenden - and I decided to investigate. Allen Anscombe (1824-1903) became a draper and milliner in Harpenden in 1855, possibly helped by his father-in-law, Thomas Ashby. In 1869 he moved to larger premises and the business grew substantially, but eventually closed in 1982, The story is given in Anscombe's Department Store, Harpenden, 1855-1982, with some pictures and advertisements.

In researching the store I was delighted to discover there had been an article, with photographs, about the "rapid wire" cash system in an article in the Hertfordshire Countryside, and there is a Cash Railway Website, dedicated to the system which has fascinated me as a child.

The research highlighted one of the limitations of the British Newspaper Archive at the present time. It is almost certain that such a large store would have regularly advertised in the local newspapers - so I might have expected to find many press references. However the archive has no newspapers covering the central area of the county - apart from the Herts Advertiser of 1925. This situation will improve as more papers are put on line - but it is a reminder that if you search the archive you need to check whether the archive contains local papers for the relevant years.
Posted by Chris Reynolds at 7:09 AM