A Brick made by Miskins of St Albans circa 1895 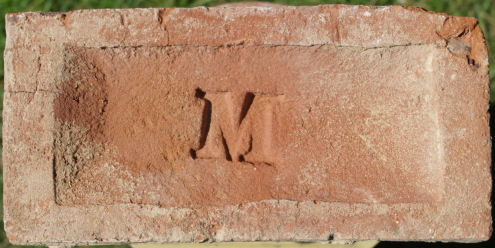 This brick, supplied by Roger, came from a house being modernised in Roseberry Terrace, Upper Culver Road, Bernards Heath, which is dated as 1899. The house is not far from the brickworks which were used by Miskins to make and it is known that Miskins built other houses in Upper Culver Road and on nearby Sandridge Road, in 1905 or shortly after. It seems very likely that the "M" stands for Miskin - but can anyone confirm it. The fabric is similar to other bricks made on Bernards Heath, such as those with the "JR" for Jacob Reynolds.