In 1908 a company called Crown Publishing Co appeared in St Albans and published some very distinctive comic post cards by an artist using the name of Karaktus. In addition they published a number of unsigned cards in the "Crown Series" by an unknown artist.

I have still not succeeded in identifying Karaktus, but have found some earlier history for the company - and the other unidentified artist could well be a known comic card artist called Fred Stone. 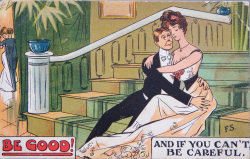 In 1905 the London View company was established in London and while it concentrated on view cards it also produced a number of comic cards, many of which were signed "F. S." (for Fred Stone) - and most of the rest were stylistically by the same artist. In 1908 the company closed. 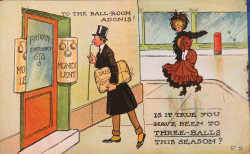 Comic cards have been identified in the "Crown Series" numbered 1008 and 1009 which very closely resemble those of the London View Company - and one carries the signature "F. S."  The cards are not labelled "London View Company" but may have been produced by them as it seems that a number of their cards did not carry their name or any logo. [I will be monitoring ebay for other examples - and earliest posting dates.] 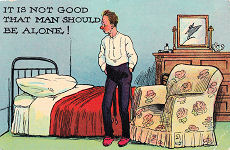 Towards the end of 1908 The Crown Publishing Co. of St Albans started to publish cards in the "Crown Series" with the earliest sequence number so far identified being 1026. These are similar to the cards published by the London View Company - and are probably by the same artist. At about the same time they started publishing the Karaktus cards. The company appears to have published no more cards after 1909.

For more information see the bottom of the Karaktus page on the Genealogy in Hertfordshire web site.
Posted by Chris Reynolds at 10:40 PM