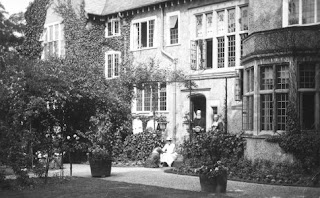 "Boro'gate" was one of the large houses built around 1900 at the north end of St Peters Street, St Albans. It was on the south side of the Carlisle Road junction, and on the north side of the junction there was "The Hollies," occupied by Richard Gibbs (1834-1910), one time Mayor of St Albans, an alderman on the Herts County Council, joint founder with his father of the Herts Advertiser newspaper, and nephew of my ancestor, John Gibbs, of Aylesbury. Not far away, at the north end of St Peters Street was another, slightly smaller, house called "Calverton" which was built by my grandfather, Harry Finch Reynolds.

Barry's ancestor moved into the newly built house in 1906 and he has kindly provided a photograph and other information. In 1929 it became a boarding house for St Albans High School for Girls and in 1961 was sold. The site now holds the offices of the Trans-European Division of the Seventh-day Adventists.
Timeline 1905-1961
Posted by Chris Reynolds at 8:32 PM