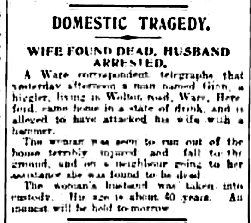 See my answer to Dennis's original question.
Posted by Chris Reynolds at 9:22 PM