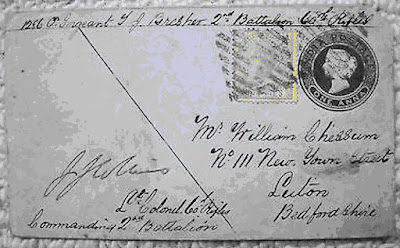 The following background was supplied:

The 60th Rifles joined the South Afghanistan Field Force, Reserve Division, at Multan in October 1878. November saw some companies of the regiment on escort duty to General Stewart and various Royal Artillery divisions, before they arrived via the Bolan Pass at Quetta towards the end of December. On 8th January 1879 the 60th Rifles marched through Kandahar, which had surrendered on the previous day. They had an expedition to Kelat-i-Ghilzai before returning and camping at the old 1839 British barracks at Kandahar (where Collins joined and took command of his regiment), until the end of March 1880 when they marched with Stewart to Ghazni, taking part in the action at Ahmed Khel. After some time in the Logar valley, the regiment eventually moved to Kabul at the end of July. After the march to Kandahar in August the Rifles were engaged with the enemy during the reconnaissance of Baba-Wali, and during the following day in the Battle of Kandahar that defeated Ayub Khan. They reached Quetta again on 19th September, and then onto Sibi, where Lt. Colonel Collins died of dysentry. With Macgregor they went out against the Marri tribes and then finally returned to Mirat on 24th November 1880.

A quick check shows a long (but not very informative) tribute in the Luton Times of 18 June 1880 including the following:

To the memory of
Colour-Sergeant Chessum
of New Town Street, Luton,
who fell with his face to the foe,
in Afghanistan
'He did his duty.'

While the original letter has been lost another letter is recorded in the Luton Times of 18th June:

The following letter has been received by Mr. William Chessum, of New Town-street, relative to the death of his son in Afghanistan, and indicates the respect in which he was held:

Camp Hadjee Mahomed Shah, Afghanistan.
May 3rd, 1880.
Dear Sir
lt is with sincere regret that I find it my duty to write and announce to you the death of your son, Colour-sergeant J. Chessum, 2nd 60th Rifles. This sad news has no doubt reached you officially, through the War Office, and privately from some one or other of his comrades, but I should feel that I was wanting in gratitude to the dead if I failed to convey to you my testimony as to his worth and excellence.
I have known your son since the time he joined the 60th Rifles, and latterly most intimately, he having been the Color-sergeant of my company for some years. Being Brigade Major at the action of Alinad Kleel on the 19th ult. I was not myself with the company at the time he met his death.
The company, however, was there (and had been for some time), forming part of the personal escort of Lieut. General Sir Donald Stewart, commanding the forces, and he (your son) was killed with two other men of the company by a sudden rush of Ghases.
He died, as he had lived, a good and gallant soldier, and was buried on the field of battle by the Rev. Mr. Warneford of the Church of England. Of his loss to myself, the company, and the battalion generally, I hardly know how to write.
Individually I felt that in him I was acting with a straightforward and upright man, one who had the interests of the company at heart and who was beloved by his brother Non-commissioned Officers and comrades. This high opinion of him was shared by every officer past and present of this battalion, and I am justified in stating that the news of his death was received by one and all with universal sorrow.
Of the many excellent Colour Sergeants, past and present, in this Battalion, I know of none who possessed to greater degree that happy tact of making all things go happily in a company than he did, at the same time performing his duty with impartiality and strictness.
Any words I could write, or praise which I could bestow, would, I feel would be only a poor tribute to his memory; it will, however, I trust, be a consolation to you and to his family to know how deeply we all feel his loss, and how much we miss him.
Sympathising with you in your sorrow, I remain, dear Sir, yours faithfully,

REGINALD CHALMER,
Captain Commanding Company ' G.' 2nd Battalion, 60th Rifles.
P.S. —I have delayed writing to you till the mail service was established to Cabul.

A check on Ancestry shows that John Herbert Chessum was born in 1850 at Baldock, and in 1851 was living with his parents [John] William Chessum (tin plate maker) and Amelia at Omega Place, Crib Street, Ware, but the family had moved to Ebenezer St, Luton by 1861.
Posted by Chris Reynolds at 8:25 PM