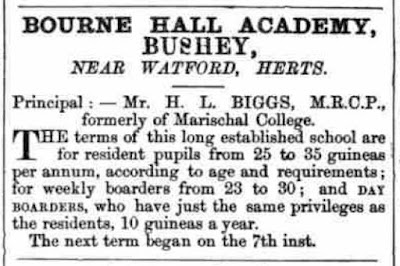 Over the last few years the digitization of old newspapers on the British Newspaper Archive has made it far easier to investigate at least some of the private schools whose records do not exist.


In 2012 I was asked about Bourne Hall Academy, at Bushey and came up with an outline history based mainly on trade directories and census returns. About a week ago Cynthia contacted me to say that her relative Henry Hunt Sirkett had been at the school and he was recorded as having passed exams in the Herts Advertiser.

I decided that it would be interesting to use this school as a case study to assess how much extra information was available - particularly in the Herts Mercury (for the early years), the Herts Advertiser from 1855 and later from the Watford Observer. In fact I found so many references that there was no way I could find time to view them all, much less record all the names and events.

I decided to concentrate on the ownership and naming of the school as told in adverts. I discovered that H L Biggs took over Grove House boarding school in January 1844 and moved to Bourne Hall Academy by 1850. From then on there were regular reports in the papers of events such as prize-giving days and cricket matches, and details of students who passed external examinations. (Because to their number I selected three or four such items to examine in detail.) Things seem to have gone well until 1882 when H L Biggs handed over the school to his son H B Biggs, and it would seem that the new headmaster was not a success and in 1884 it appears that some boys who had prepared for some external examinations were not entered.Definitely the number of boys listed as passing external exams in 1888 was lower than one would have expected some ten years earlier. In addition it seems thatsome of the school buildings may have been used teach girls foreign languages. 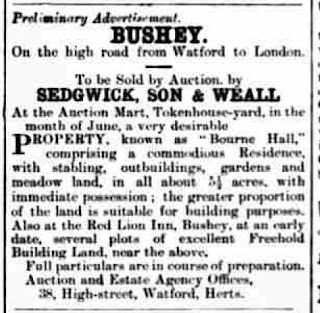 The exact date that the school closed is uncertain but the furniture was sold off early in 1889, and the landlord put the property on the market a few months later. The bankruptcy hearings were revealling and demonstrate than the young headmaster had failed to learn good bookkeeping while a pupil at the school ...

Posted by Chris Reynolds at 7:04 PM