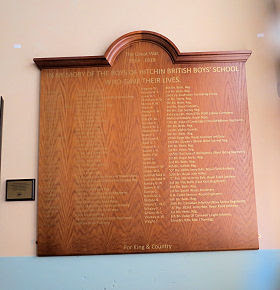 On Thursday I visited the British Schools Museum at Hitchin with a party from the Genealogy Group of the Tring U3A. I had previously visited the Museum in 2010 and have added a report of the latest visit to the earlier report.

The visit was well timed as the Museum had just opened an exhibition on the First World War. Only days earlier they unveiled a war memorial in one of the classrooms with the names and regiments of the pupils who had lost their lives in the conflict. In addition the book Remembered with Pride, by Jean M Handley has been published - and gives detailed biographies and war time histories of the casualties.
Read My report on the Museum and the Exhibition
(which includes details of the book, which can be brought from the museum)
The Museum Web Site
Posted by Chris Reynolds at 8:30 PM