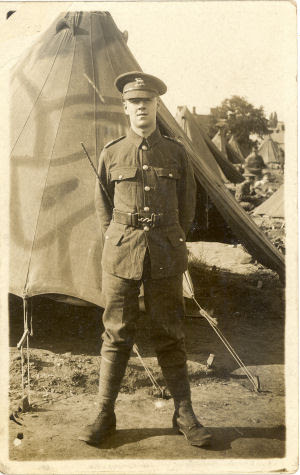 The 24th County of London Regiment (The Queens) was a territorial regiment that had its origins in the 4th Volunteer Battalion of The Queen's (Royal West Surrey Regiment).

When the War broke out this was one of the battalions which came to the St Albans area in August 1914 with the 2nd London Division and went to France as the 1/24th County of London Battalion in March 1915. However the 2/24th Battalion remained in the area between April and June 1915. Can you help? I don't know which part of the St Albans area (including surrounding villages) they were posted.

This picture of an unknown soldier in The Queens was taken by L. L. Christmas, a photographer who moved to St Albans from Watford in the latter part of 1914 and took many more photographs of the troops.
Posted by Chris Reynolds at 8:48 AM