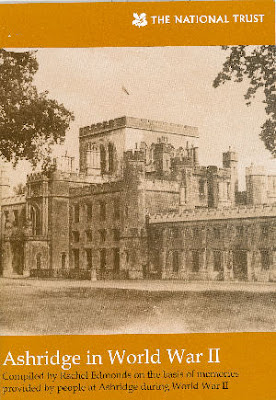 During the Second World War troops were camped in the woods of the Ashridge Estate and a hospital was opened at Ashridge. This little booklet, Ashridge in World War II is based on the memories of people who knew Ashridge during the war and gives details of the regiments that were billeted there. The hospital not only took casualties from Dunkirk but also victims from the German bombing raids. In addition many women from London were taken there just before they were due, and some 3000 births were recorded there between 1940 and 1946.


While this delightful little booklet was published in 2009/10 I noticed that copies were still for sale at the National Trust shop at Ashridge a few months ago.
This is one of my Hertfordshire History Books for Christmas

More Information about Ashridge
Posted by Chris Reynolds at 10:11 PM