The Bedford Times coverage of Hertfordshire News in 1854

The heading on this paper reads The Bedford Times and General Advertiser for Beds, Herts, Hunts, Bucks, Cambs, and Huntingdonshire. It looks interesting ... 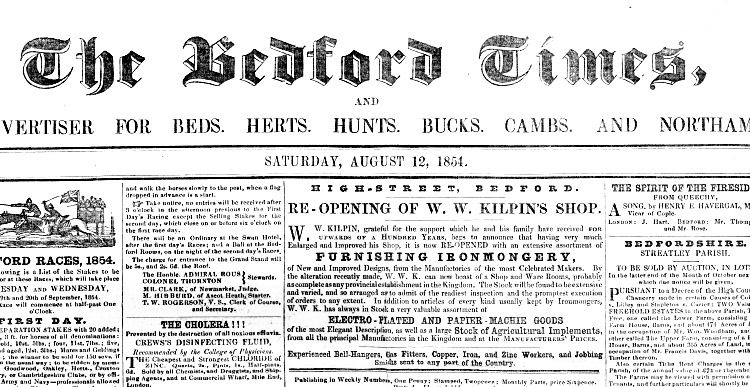 I am posting this to warn you that such headings can be very misleading - so to illustrate the point I scoured the paper for all the references I could find to Hertfordshire.  I first turned to the back page where there is a listing of where the paper can be brought, and Messrs Paternoster, of Hitchin (which is close to the Bedfordshire boundary) was the only one. I then spotted an advert for a large sale of live and dead stock at Temple Dinsley, at Preston, near Hitchin. Digging deeper a very large advert revealed that the Paris Chocolate Company was looking for new agents to sell their products and they has already recruited Gilbertson & Son at Hertford, and W. Bull, a chemist at Royston. And if I was unwell I could buy Dr. Pascoe's Infallibes [sic] Globules from Roberts of St Albans, Walker of Hitchin or Bully of Baldock.

But was there any real Hertfordshire News? After much searching I found one block of news "sound bytes" which squeezed a two sentence mention of an incident in St Albans between single sentence reports of discoveries at Pompeii and a funeral in Belfast. 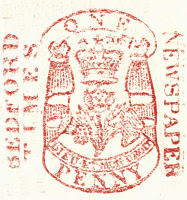 The real truth of the matter is that the Bedford Times was a local paper, almost exclusively dealing with the Bedford area - apart from the national, parliamentary and international news which nearly all pre-1855 local newspapers covered. And until the stamp duty on newspapers was removed in 1855 many local papers had a rather limited coverage of the town where they were printed!
Posted by Chris Reynolds at 7:00 AM