What happened on this site in April 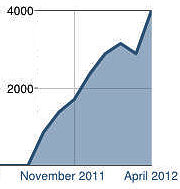 Towards the end of March I decided to give the site a “holiday” while I had three minor operations. This affected the user statistics in the short term, as during this period (which includes a week of April) the number of page views to the Newsletter dropped by about half. However they rapidly increased after I started posting again on April 6 and by the end of the month had reached 4028 page views, compared with 3012 in February and 2870 in March. The number of visitors to the main site is also up, and it looks as if it could have well over 250,000 visits in the complete year (First 4 months 93,036).

The only disappointing area is on the donations to help the mentally ill of Hertfordshire which, after starting off like a rocket in January almost dried up – with no donations at all in February and March – partially made up by two generous donations in April. If you haven't yet made a donation ask yourself whether the help I have given was worth the cost of a cup of coffee and a cake at Starbucks? I know some of you may be finding things a bit tight - but the economic situation is causing many people severe mental distress - so the Herts Mind Network has more work to do to help them and needs every penny it can get.

During part of March and April there was a problem with the Ask Chris and Tell Me facilities due to a fault relating to the code to minimise spam. This meant that I got fewer questions than usual. It has now been corrected but another “spam trap” could mean that one or two of the messages I sent out didn't get through. As a result I may have to reorganise how I handle emails on my P.C. If you were expecting an email from me and haven't had one please let me know.

(B.T.W. - Two of the operations were very successful – and I am delighted with the improvement of the sight in my right eye. The third operation has been delayed – and in addition I am also in the queue for a cataract operation for my left eye. I don't expect to take another "medical holiday" but instead I am currently planning on an average of five “routine” postings a week, plus extra posts responding to your messages and comments as required.)
Posted by Chris Reynolds at 4:48 AM