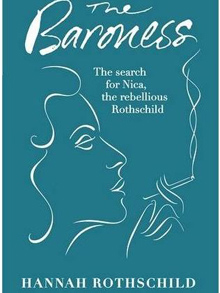 Last September I posted details of the book Nica's Dream, The life and Legend of the Jazz Baroness, by David Kastin. Now Hannah Rothschild has just published a book The Baroness: The search for Nica, the rebellious Rothschild. and I note that the Daily Telegraph Review includes the following:

Appropriately enough for someone who would live by night and be drawn to the flames, Pannonica was named after a moth: her father, Charles, was an entomologist and the childhood home, Tring Park in Aylesbury – one of the “huge three-dimensional calling cards” built by the Rothschilds to announce their arrival – also housed her uncle Walter’s private collection of stuffed kangaroos, whales and giant tortoises. Nica would later live in what Hannah calls “an animated version” of Tring Park, when she shared her modest New Jersey house with 300 or so cats.

Tring Park is not in Aylesbury, Bucks, it is in Tring, Herts, and one of things that distinguishes it from the other Rothschild houses in the area is that it is not "one of the three dimensional calling cards built by the Rothschilds to announce their arrival."  It was a much older house which was given what could be considered a comparatively conservative upgrade. I don't know if these errors are in the book or in the review but such inaccuracies in facts which are trivially easy to check give me no confidence in the reliability of the book. It will be interesting to see if the Daily Telegraph publishes a correction.

Posted by Chris Reynolds at 8:10 AM