Little Hadham has been upgraded - and a new UNCLE link 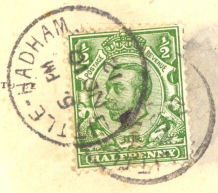 I recently acquired a 100 year old post card of The Ford, Little Hadham, which had been posted by Kathleen Jones, the housekeeper to the widower, Charles Poile - who was giving her a week off at Christmas. Kathleen's mother was Sarah Lydia Uncle so may be related to the family earlier described in UNCLE, Much Hadham, early 19th century.  The card was sent to Nellie, the wife of Leonard Ballard, a London Metropolitan Police Constable, and while Kitty and Nellie were obviously friends the nature of the friendship is not known. The card was published by the J. Houghton, of the Little Hadham post office.