Laz Roberts - a St Albans pioneer in Chromophotography in 1870? 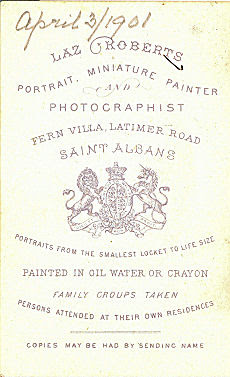 To ensure interesting material on this site I scan ebay looking for low cost items which might have a significant historical interest. Recently this carte de visite caught my eye. While the picture of the little girl was uninteresting compared with many others, the back caught my eye. It named a St Albans photographer I had never heard of with a distinctive name and a penciled date. So I brought it!

One can never be certain what one is going to find in such cases. Laz was a photographer in High Wycombe, Bucks in in 1868 and 1871, and he was in St Albans circa 1870 so he was only in St Albans for a short time and I could have stopped the investigation at this point.

However I decided to investigate further. Via the usual genealogy tools I quickly traced him back to his birth in 1833, and discovered his father painted portrait miniatures. In 1861 Laz was colouring photographs. But what happened to him after 1871? Children continued to appear until 1879 (thirteen in total) and I tracked most of them down to see if this gave any clues to what happened to their father. I discovered his widow remarried in 1890 and the children usually described him as an artist rather than a photographer when they married. I was unable to find when he died.

However a google search provided other examples of his work when based at High Wycombe, and a reference that in 1870 he was "working on entirely new process of his own, Chromophotography, and taking life-like carte de visite in Natural Colours" Perhaps he was following the work of a leading photographer and inventor in Bohemia - or perhaps he was developing a novel technique to produce "colour photographs" of his own. However he may just have been using a posh word to describe tinting photographs. It is not clear whether he ever produced commercially acceptable coloured portraits and if so whether any survive. If you know of any examples please let me know, as an examination would reveal whether he was using Eastern Europe process or not.

For more information see the detailed report on what I have found so far about Laz Roberts and Chromophotography.

I have been unable to identify the sitter or explain the date, which is much later than the photograph.
Posted by Chris Reynolds at 7:23 AM