Before Christmas I posted Something for you to do over Christmas to raise money for charity - the idea being to try and identify more soldiers who were in Hertfordshire from old post cards and other pictures. I report on three responses below.

======================================
The First is a post card showing soldiers grouped round a howitzer. Fiona tells me that the officer standing behind the gun is Eustace Nugent Fitz-George de Radcliffe Cooper. This confirms that the picture shows the unit which was based at Apsley, Hemel Hempstead between August 1914 and March 1915. As a result I have posted an old newspaper report from 1914 which mentions several soldiers who were members of the Brigade. Because a number of names are on record it should be possible to identify further officers and men who are in the picture - but I put this up as a challenge for visitors to this site.


Peter has kindly provided five digital images of the London Scottish on a musketry course at North Mimms in August 1915, Information on the back of one of the post cards allows the soldiers to be identified as part of the second line battalion, the first line battalion having been one of the first battalions to see action in October 1914. While there is not definite evidence it seems likely that the musketry course involved shooting on the Chalk Hill Firing Range.. 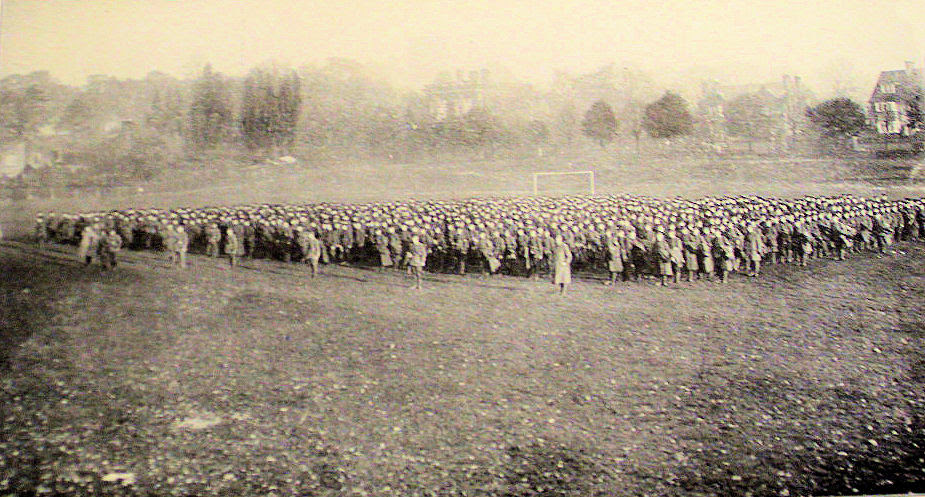 Jon has suggested that this picture of the Imperial Service Division at St Albans shows them on parade on the former St Albans School playing fields at Belmont Hill. The large house in the middle background with multiple chimneys would therefore be Torrington House - close to the site of Holywell House owned by the Marlboroughs/Spencers well into the 1800s. It would have been close to the White Hart HQ.

I am still interested in any further information on troops who were based in Hertfordshire in the 1914-1919 period - and as promised in the earlier post I have made a donation of £20 to support the Mentally ill in Hertfordshire.
Posted by Chris Reynolds at 10:50 PM