A link between Thomas Edison and Hertfordshire 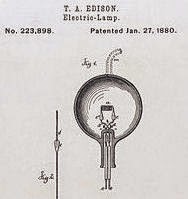 As a young man John Verity spent some time around 1880 in America working with Thomas Edison (whose first light bulb patent is dated 1880). He returned to England and his efforts culminated in the great display of incandescent lighting at the Crystal Palace Exhibition of 1882.   In conjunction with Sir James Pended and Sir George Elliot, he founded the Metropolitan Electric Supply Company. As chairman of Verity's (Limited) he was a large employer of labour in Birmingham and Manchester.


In 1897 he made Sandridgebury, Sandridge, his country home and married the daughter of a London banker, Henry Lubbock, of Newberries, Aldenham, Herts. Later the same year he also hosted a meet of the Hertfordshire Hounds at Sandridgebury. However he only lived in Hertfordshire for a short time - perhaps after becoming High Sheriff for the County of London, and died in 1905.

More Information about John Verity
Posted by Chris Reynolds at 11:23 AM